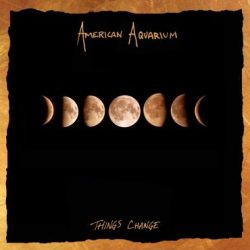 When, after a decade of constant touring with diminishing returns, the band members of American Aquarium all quit to take civilian jobs, leader BJ Barham would not have been judged for joining them. Newfound sobriety and imminent fatherhood, however, gave him new perspective and a stream of new songs flowed. So he recruited a new American Aquarium from scratch to have another crack at making it. He may well succeed, as this seventh album is by far the strongest and most consistent set of songs he has released, and the key word here is songs.

All ten tracks stand up as individual compositions with no filler. Producer John Fullbright enables clarity in each track to let the words come to the fore, but with superb musical arrangements, and strong distinction between song styles. It’s obvious that a talented new band has formed,  especially the gorgeous pedal steel touches.

Fullbright himself offers keys, with subtle Mellotron guidance. That Fullbright is a gifted singer/songwriter himself seems to be the benefit here, as he knows to put the song first, then fill it out. Barham had a tendency to shout out his songs, but Fullbright has encouraged more subtlety. Not that there isn’t power and rock here; many of the lead out tracks roar out, not unlike another loved southern band that never quite made it, Slobberbone.

Later tracks tend to more country, more Waylon territory. Lyrics are autobiographical, not only in terms of what has happened to him, but what he has seen. Strongly blue collar, Barham sees himself as an everyman, and a southern one at that, with his North Carolina and Fullbright’s Oklahoma forefront. Indeed ‘Work Conquers All’ is the Okie state motto. Barham addresses politics in ‘The World Is On Fire’, with an almost soapbox polemic and anger. But he has to be obtuse: as he commented to Rolling Stone “at least 50% of my audience voted Trump, so I’m not going to alienate them by saying they are wrong, I just want to find out why”. In ‘Tough Folks’ he sings “Last November I saw firsthand what desperation makes good people do”.

The album is not all serious though, with ‘I Gave Up The Drinking (Before She Gave Up On Me)’ sounding exactly how you’d expect it too. Penultimate track, ‘Shadows Of You,’ is a gorgeous classic 6/8 shuffle where he self reverentially sings about the minor chords used in sad country songs. ‘Things Change’ as the title track surely almost wrote itself, considering his last two years. This album has everything needed for success, and sounds even better with familiarity. Perhaps things really will change for Barham this time around.