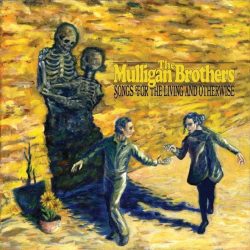 Some artists spend their whole careers trying to find their sound or create a piece of work that defines them as a band and The Mulligan Brothers have done just that on their third full-length album in five years, the magnificent, ‘Songs For The Living and Otherwise‘. Following on from their excellent self-titled debut and sophomore record, ‘Via Portland‘, The Mulligan Brothers have capitalised on the formula that has worked so well for them in the past and then some.

Since Via Portland, the group has parted ways with one of their original members, Gram Rea, and added the first ‘Mulligan Sister’ – Melody Duncan on fiddle – who also contributes some backing vocals and brilliant vocal harmonies. Their self-produced third record sees the band elaborate on the sound that they have previously established, and with the aforementioned line-up change and their time spent in their studio, the band have been allowed time to focus on the craft of their songs, at their own pace and it has seemingly had endless benefits as the result is an accomplished 11 song set which never falls flat.

Opener, ‘The Deal’ is a perfect transition into the new chapter of their life as a band and picks up where the band left off on their previous record, largely driven by acoustic guitar and the soothing tone and personal lyrics of lead vocalist and songwriter Ross Newell, whilst allowing the rest of the band space to add minimalistic instrumentation before building into an upbeat full band bridge with soon-to-be live favourite sing along vocals. ‘Roseanne’ follows immediately with Newell swapping his gentle vocals for something a little more soulful and a blues harp to complement the overall vibe of the song.

‘Possession in Gm’ is the first song to come a little out of leftfield with Newell once again changing things up and adopting a low-key delivery as the band attempt their first character based song which also sees Melody Duncan take her first lead vocal section and really make her mark on the song as the vocalists trade verses back and forth. Although the track isn’t what you would expect from the group it further cements the band’s ability as songwriters and performers and keeps the record interesting.

Throughout ‘Songs For The Living and Otherwise‘, there are countless moments of excellence, largely down to the fact that each of the musicians in the group are talented in their individual field but also understanding of the songwriting and how to use their instruments to evoke emotion and complement the tone of the song. ‘Ghost Town’ is what could be described as a classic The Mulligan Brothers song, ‘Loving You Is Easy’ is a real earworm that will be stuck in your head for days but the centrepiece of the record and album highlight is ‘Great Grandaddy’s War’ which is arguably the group’s best, and most personal, work since their humble beginnings five years ago – a beautiful introspective ballad, with accompanying strings and harmonies which contribute to the experience.

The second half of the record follows suit in that it sees the band experiment with some different sounds, ‘I Know That Man’ is a fast, country song featuring an extended fiddle solo, foot stomps and a gravelly vocal delivery, lead single from the album ‘Devine Design’ is a harmony-filled, mid-paced track and would serve as a great introduction to those who haven’t heard the group before, and ‘I Need To Get Out’ is the album’s final song and experiments with an electronic drum sound and other instrumental effects, and is a brilliant culmination to a brilliant record.

In summary, ‘Songs For The Living and Otherwise‘ deserves to be heard in full, from start to finish and will serve as a stepping stone for the band to become one the biggest names in the Americana genre in years to come.