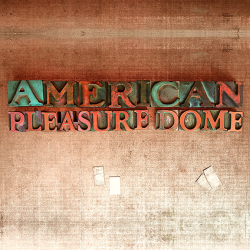 There is a Buddhist saying that, ‘The body ages, the mind doesn’t age’. At 53 years of age, Hans Schumacha, American Pleasure Dome’s leader and songwriter may have reflected on this saying when releasing this eponymous debut album. Hailing from Minneapolis, American Pleasure Dome are a four- piece band exuding a mellow rock tone with occasional shades of country.

Alcoholism, infidelity and the ills of social media all have a part to play in this opus which is lyrically explorative, if occasionally opaque. The mellow haze of rhythm guitar, bass and drums is cut through with Schumaca’s melodic vocals and a top layer of measured lead guitar. The first few tracks are slow burners till the likes of ‘Obey that Bling’ and ‘Happy Pills’ arrive, feeling like they are growing on you like subtle tendrils. ‘Obey that Bling’ laments the disruption to genuine friendship and community by our obsession with media culture, whilst the instruments at the end of ‘Happy Pills’ seem to be describing a disconnected, self- deceiving state of bliss.

There are memories of Evan Dando in some of these pieces, particularly in Schumacha’s vocal delivery and some of the song structures. ‘Saint Grumpy’ is a tribute to Schumacher’s favourite bar in Minneapolis, flirting with country tones and motifs but seemingly not taking them too seriously. As a debut album ‘American Pleasure Dome’ gives its audience an exploration of some of the darker sides of contemporary culture; we may do well to keep listening.

Contemporary culture is explored through a mellow haze of guitar tones