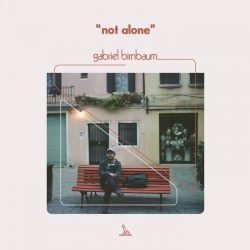 Gabriel Birnbaum takes us down a mellow path on his first solo record: ‘Not Alone’. This is a stripped back and low key album when compared to Birnbaum’s indie-rock style as part of band Wilder Maker and his work as a jazz and avant-garde saxophonist. Exploring themes of loneliness and solitude throughout, the album is tinged with melancholy. Birnbaum quickly establishes his sound, and most markedly through his occasionally raspy vocal delivery.

Birnbaum has got a text and so on album opener ‘Not Alone’ we get to hear all about it: “I like to see your name appear on my phone”. Sounding a little creepy, his delivery is sombre and gravelly, we get the sense that Birnbaum is convincing himself that there’s more to this message than there might be: “Thinking of you somewhere thinking of me and I’m not alone”. Musically, the track is based largely around an electric guitar, ultimately descending into a weird echoey chamber. It’s easy to see Birnbaum as very much alone by the end of this track.

On ‘Blue Kentucky Mile’, Birnbaum is driving himself along to a meet up, perhaps with the texter from ‘Not Alone’, but en route he decides to “turn  the music up and swerve, but no-one’s on the road this late, I’m all alone, I think of you.” Again, the focus is on Birnbaum’s vocals, though this is backed beautifully by some gorgeous guitar work.

The track ‘I got Friends’ was at first confusing. It’s so bleak and moody it’s easy to mishear the lyrics as “I got no friends”. The guitar feels gloomy, Birnbaum sounds like he’s about to cry: “I had a dream last night, that everyone I saw, flashed guns in my face, took what I had, and in their smiling faces I didn’t see yours, but I should have known it was there”. Bitter, no?

‘Comeback Song’ takes the sound up a notch and is more upbeat and rockier than the rest of the album. It feels happier and it’s great to hear Birnbaum really push himself – the lyrics are strong and the delivery stronger: “Everyone deserves a comeback song…the city is saved, the city is saved”. ‘Mistakes’ also delivers something that feels more optimistic, the funky piano and guitar giving this a sense of direction not felt in some of the other songs.

Throughout the tracks, Birnbaum seems unable to agree with himself if  he’s actually truly alone. He has friends, yet he recognises that the loneliest time is when the person you want, doesn’t want you: “the only time I am ever alone, is when I think of you”. Ultimately, the album works well as a powerful exploration of what it means to be alone.