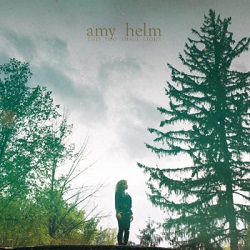 ‘This Too Shall Light‘ is the second album under her own name, but Amy Helm’s music goes back someway longer as a founder member of Ollabelle, and as a backing musician in the Midnight Ramble Band.  Yes, that Helm.  For this album Amy Helm has teamed with Joe Henry as the producer to make a richly layered and soulful Americana. All the more remarkable in that it all came together in an LA studio rather than back home in Helm’s Woodstock stomping ground, and that the recordings were put together and laid down in just four days.

Some of the songs on ‘This Too Shall Light’ were recorded for familial links – ‘The Stone I Throw‘ is a finger-snapping gospel-blues that was also recorded by Levon and the Hawks in 1965. It also falls in with several songs on the album in that it carries a hint of political protest against an unnamed but pretty obvious target with lines like “don’t build walls and barricades / so a man can’t have his say“.  There’s a similar gentle political poking on Allen Toussaint’s  ‘Freedom for the Stallion‘, which is another gospel-blues but this time it’s taken as slow as molasses and has Amy Helm singing “we got men making laws that destroy other men / They make money, God, it’s a dog-gone sin“.  It’s a song that frames Amy helm’s impassioned vocals perfectly, and the recording has a really live feel to it.

Blues tinged gospel vocals, with multi-part backing harmonies, is the predominant tone of the album.  The splendid cover of the Milk Carton Kids’ ‘Michigan‘ takes the soft finger-picked introspective folk of the original and pumps up the dramatic tension, turning the breathless central question “what am I supposed to do now, without you ?” into a full throated emotional outburst.  A few songs do take a different track – the bouncy cover of ‘River of Love‘   (the T Bone Burnett song, not the George Strait one) is a rock and roll ballad which strides along to a muffled drumbeat, whilst the cover of Rod Stewart’s ‘Mandolin Wind‘ features some nice interplay between acoustic and electric guitars as it opens out into a a shuffling country feel.

The idea of the album was to capture musicians sparking off each other in an organic way, the rapid recording process feeding into this with an urgency to create.  It might have been benefited from a little more working on in advance.  Sure, the song list is varied with songs snatched up from a half century apart, but there’s over-reliance on those gospel-blues harmonies and familiar organ riffs.  Amy Helm has a fine voice – the near show-tune stylings of ‘Long Daddy Green‘ prove that, but there’s some sparkle missing from this brave attempt of a record.

Amy Helm nails her colours to the mast on this mixed collection of, predominantly, covers