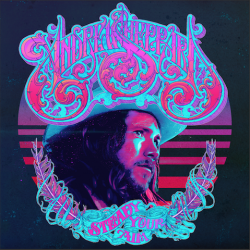 Records that sound like the journey an artist has travelled to make the music you’re listening to are few and far between these days. Andrew Sheppard’s backstory includes growing up in the high desert plains of Hailey, Idaho, through the hustle and grind of LA and to the honky tonks of Tennessee, and back to the heartland of America and his roots. You can tell.

Opening number ‘Take A Walk With Me’ starts with a picked guitar and a wide open organ, before taking the melody of The Band’s ‘The Weight’ and ‘drowning it underneath an electric chorus.

It’s a trick that continues through the western soundscapes of ‘Red Wine & White Roses’ and the twang high and lonesome of ‘Travel Light And Carry On’. Lyrically, we’re on familiar ground for the genre (“I don’t respect men like you”), but Sheppard’s voice has something all of its own. The analogue production grounds the music in the earth, alongside pedal steel, Wurlitzer and organ.

The likes of ‘Lies As Cheap As Whiskey’ (“Here’s another drinking song”) and ‘Further Away’ (“in the distance I hear a radio playing something soft and sweet”) sound exactly like their titles suggest and it’s a nagging problem that the record never escapes from: predictability. It’s a great sounding album, the trouble is we’ve heard it all before.

Take a load off, Andy, nostalgia ain’t what it used to be on an album that wears its influences on its well-worn sleeves.