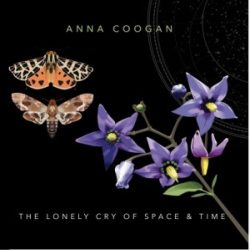 Boston-raised singer-songwriter Anna Coogan began her performing career in Seattle (Washington) before moving to her present home of Ithaca, New York. Her diverse musical background, which includes both classical opera and alt-country, shines through on her new album. The Lonely Cry Of Space & Time, Coogan’s fourth solo album (including her album with J.D Foster, The Birth Of Stars), follows on from her collaboration with Pacific Northwest-based alt-country band 19.

Combustible, diverse, sometimes dark and mystical, Coogan travels far, launching her trained three-octave soprano vocals on the opening section of If You Were The Sun high into the stratosphere. She stretches it to the limits at times, but nails it far more often. One such occasion is on the striking Wedding Vow, where her stunning electric guitar playing is complemented by Willie B (Brian Wilson) on drums and moog bass, Hank Roberts on cello, and Brooks Miner on organ. The instrumentation goes into overload towards the end, but her vocals and guitar playing more than compensate. The different phases are characteristic of her work – some of her songs are a combination of diverse parts.

Ever experimenting, both instumentally and vocally, Coogan doesn’t just cross boundaries – she flattens them. She breaks free of all restraints, as does her partner on the album. Willie B, who is given freedom to go wherever the urge takes him. The tracks embrace subjects ranging from her concern about the planet and Trump’s successful presidential campaign to songs about personal heartbreak, and even include a guitar instrumental (Last Exit). Willie B and Miner join her on the final track, another instrumental, By Morning.

Vocal tracks include the poppy Meteor, the moody slow burner Follow Me, and the impassioned title-track The Lonely Cry Of Space & Time, plus the more easily accessible Collateral. The latter is the ideal platform for both her voice and roving guitar playing, encompassing varying influences and musical styles. With the creative gate open wide, Coogan doesn’t hesitate to march through it, and is never afraid to experiment.

Eclectic performer with a voice capable of performing anything, and well.