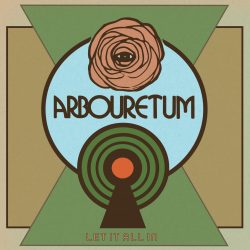 Baltimore based band Arbouretum’s latest offering is an eclectic mix of folk, blues, Americana and 70’s psychedelia. At its best it is fresh, nuanced and absorbing. At its worst it is a so-so retreading of well worn musical paths. Opening track ‘How Deep It Goes’ is a stylish political statement. Jangly guitars give the feeling of sun-dappled forests and reverb galore increases the trancelike atmosphere. This is Arbouretum at their best. Dave Heumann’s vocals pierce through the wall of sound but don’t overpower it. Everything sits in a perfect balance and the song clicks along wonderfully.

This continues throughout the majority of the album. There is an interesting variation of sound, however. The keyboard work of Matthew Pierce is a particular highlight, especially on the wonderfully psychedelic fourth track ‘Night Theme’. The guitar work of Heumann also stands out and the record is most enjoyable when the band just gets in their zone and jams. The eleven-minute title track is a prime example of this. The psychedelia and Americana elements blend wonderfully and invite you to lose yourself in the hypnotic soundscape created.

There are a few tracks where the formula falls a bit flat, however. Psychedelia has been a powerful musical influence for the past fifty years (yes, the 70’s were fifty years ago…ouch) and there has been so much output in that time it’s hard to keep it fresh. Granted, the band manage this most of the time – the injection of the folk and blues influences give the sound an individual twist. Even so, it doesn’t always come off and sometimes you could be forgiven for thinking you had happened upon some unreleased Doors tracks that didn’t quite make the cut.

Overall, there is a lot more to like here than not. The band clearly have talent and work well together, with some great guitar, keyboard, and drum work. The record washes over you nicely and the psychedelic-injected Americana is a relatively novel sound which is well delivered. As stated, sometimes it strays too far into all too familiar territory, but most of the time it walks an enjoyable line between the many genres and ages it draws from and skilfully combines.

Psychedelic Americana delivers expected good vibes and not too much more