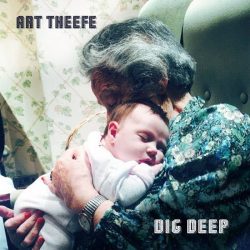 Art Theefe is an Oxford-based 3 piece band formed and led by singer/guitarist Matt Sage with Josh Rigal on bass and Joel Bassuk completing the line-up on drums.  Aided by a successful Kickstarter campaign they have crafted their debut album ‘Dig Deep’ and it doesn’t disappoint. ‘Dig Deep’ is an atmospheric piece of work that seems to have been influenced by a variety of musical genres, ranging from folk to the blues and almost to Prog/Psychedelic  Rock on the instrumental ‘Steely Jam,’ but all of them conjuring up an image of being played in smoke-filled rooms of the type that wouldn’t have been out of place in Greenwich Village in its heyday.

Maybe that’s not too surprising in some ways. Since 1994, Matt Sage has been the driving force behind The Catweazle Club in Oxford, a bohemian gathering place for a wide variety of singers, poets, storytellers and musicians which probably goes some way to explaining the variety of influences on show in ‘Dig Deep’.

Sage conjures up some evocative mental imagery and there is no better example than ‘Cold Dark Night’. He growls his way through the track with a voice that could easily be a fusion of Robbie Robertson and Tom Waits, while summoning up a dark vision of bleakness with the opening lyrics “It’s a cold dark night and a cold wind blows. Your skin is hanging off your bones.” Words powerful enough to make you shiver in anticipation of what is to follow as the song unfolds. Don’t let that fool you into thinking this is an album full of desolate mental landscapes, as tracks such as ‘Right Thing’ and ‘I Have Named You the Queen’ show Sage’s tender side while ‘Laudanum Girl’ is an agonising plea for a love seemingly lost forever.

This is a good debut album which is only a few whiskers away from being really good or even great. The excellence captured in ‘Cold Dark Night’ is offset somewhat by the slightly odd inclusion of ‘Steely Jam’ which just feels out of place and something of a filler.

That said, the convergence of musical influences on ‘Dig Deep’ could have ended up as a frustrating Smörgåsbord of different musical styles, but it’s to the Art Theefe’s credit that they have ultimately pulled it together really well and it’s a fine debut album that deserves to be listened to.