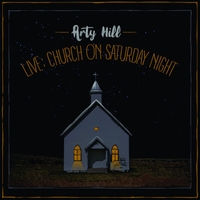 Oh yes, this’ll get the party started! If you like your Honk with a fair bit of Tonk – and vice versa – then Arty Hill’s new live album is going to be right up your gardenia lined Avenue. This is what a live album should be, gritty and down to earth; you really feel like you’re at a Saturday night gig. Arty’s sound is a little bit Nashville but with a lot of that Bakersfield earthiness thrown in – a bit reminiscent of Buck Owens or his modern day disciple, Dwight Yoakum; so it was more than a bit of a surprise to discover that Arty Hill and his excellent band, The Long Gone Daddys, hail from Baltimore.

It is a really enjoyable album. It looks like most of the songs are staples of the band’s live shows and have featured on previous studio albums but there’s one new composition on the album – Edinburgh Cowboy. Apparently Arty has spent a bit of time in Scotland’s fine Capital City – “I’m barely keeping my address but Scotland’s tattooed on my chest”! Strong sentiments from the Baltimore boy.

Standout track is the title song Church on Saturday Night – a well worded history of the early days of the Grand Ole Opry, when it was still housed at the Ryman Auditorium but there’s a lot of good, solid songwriting here and it’s no surprise to find that Hill’s songs have been covered by the likes of Jason and The Scorchers and The Texas Sapphires, among others. Musically it’s very strong. All the band put in fine performances but special mention has to go to Pedal Steel player Lynn Kasdorf who plays some really beautiful licks, particularly noticeable on opening track Big Daddy’s Rye.

The album does suffer from a regular problem on live recordings – that balance between the onstage sound and the noise coming back from the audience. Here producers Dave Nachodsky and Arty Hill himself have been a bit too careful with the audience sound and, as a result, the crowd sounds a bit thin, which you have to suspect was not the case at the time. But it’s a good recording and, on this evidence, Arty Hill and The Long Gone Daddys sound like a great band to catch live.