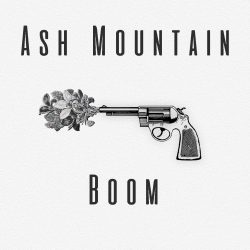 This three-song EP by the Mancunian band Ash Mountain is marked by music that is highly enjoyable but hardly original. It’s filled with jangly guitars somewhat reminiscent of The Byrds, and all three tracks sound similar. The instrumentation is full, the lead singer is often backed throughout by one other vocalist, and the tempo doesn’t vary that much. “The title track, ‘Boom’, leads off the EP. It appears to be narrated by a man whose woman repeatedly leaves him, then comes back, and boom goes his heart again. Until, at last, he appears to be unable to take it anymore and – spoiler alert – boom goes his gun. Apparently he does her in. Oops.

‘Eight Ball’ appears to involve another murder, or so it seems. It’s about a couple that winds up financially unable to keeps its farm. It appears that the narrator meets his wife down by the lake, bops her on the head with an eight ball in a sock, and “at the bottom now she lies.” The narrator then winds up with a million (pounds, one assumes), though he does miss her warmth. How he got the million is unclear. The police think the woman ran away, so it can’t be life insurance.

The meaning of the final song, ‘The Day The Music Died’, is obscure, but it might involve yet another murder. The news is announced on the telly and “nursery rhymes described the crime.”

The music’s fine – and even better if you crank it up. It is hard for this reviewer to see buying a three-song album, and one hopes that in the future these fine musicians will experiment with different sonic landscapes, and different lyrical themes, as well. But it’s a good listen.