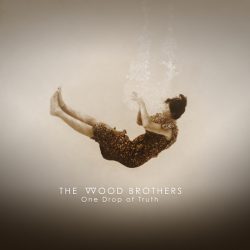 The Wood Brothers comprise the trio of brothers Oliver and Chris Wood, along with Jano Rix, and have been around for some time, this being their sixth album release. On this work they have a bluesy style which is redolent of the deep south (although the band hail from elsewhere) and after much time together they are starting to display a multitude of influences. The group have described this album as the most free they have ever done, having treated each song as if it were its own short film, and importantly it seems as if they’ve had fun along the way.

The album opener ‘River Takes the Town’ is a tale of a town being flooded and the worry that is felt for loved ones who are uncontactable in such a situation. It has a brooding feel and was written by Oliver Wood who was taking his inspiration from real-life events following hurricanes in the US. This haunting and emotional piece sets the standard and is followed by ‘Happiness Jones,’ a track that states the sometimes uncomfortable truth that wisdom comes not from being happy as the media like to depict, but rather from hard times and discomfort. The title track is one of redemption which stresses the need to be true to yourself with lines such as “Rather die hungry than feasting on lies/ Give me one drop of truth I cannot deny,” which neatly sums up the feel of this quality album. Other tracks of note include ‘Sparkling Wine,’ a straightforward love song with a hook that is reminiscent of Lou Reed’s ‘Walk On The Wild Side’ and ‘Can’t Look Away’ which closes the album and shows a social conscience that all should have. Fans of the Avett Brothers and American Roots music in general will love this album of ten original tracks.

A bluesy slice of Americana delivered with some style