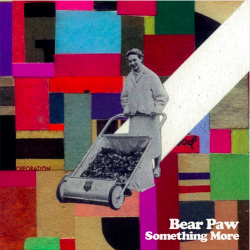 With ‘Something More‘, Bear Paw have given us a wonderfully energetic piece of work; from the first strum to the last it’s an E.P. that crackles and pops with old-school indie energy. These four lads from the marshes of North East London grew up listening to a wide variety of music, and it shows through in the varied nature of the tracks. The folk influences come to the fore on the lead single ‘Santa Maria’. Inspired by old sea shanties, it’s a slow and melancholy number about dissatisfaction and longing which drifts and twists along nicely.

Most of the E.P. has a far more explosive feel to it, though, and that’s no bad thing. The lead hook on final track ‘Where Did all the Wanderers Go?‘ sounds like it came straight off a Strokes record, and the instrumental breakdown builds up over the last minute or so to a boisterous yet finely executed end, and this is something of a theme throughout.

The overall impression is one of solid songwriting and musicianship combined with a drive and enthusiasm which really lifts the songs out of the post-Mumford indie-folk swamp. It sounds like they’re having fun, and that’s fun to listen to.

An E.P. that crackles with old school indie energy