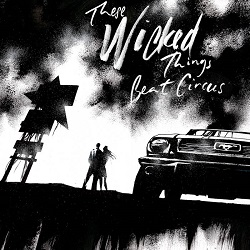 Brian Carpenter formed Beat Circus in 2002 as an outlet for his theatrically inspired musical compositions, not quite as a side-project more one of several projects that he has juggled over the last couple of decades – alongside three previous Beat Circus albums there has also been a number of singer-songwriter releases and collaborations with the Kronos Quartet, Marc Ribot and others. ‘These Wicked Things‘ is the conclusion of a Gothic Americana trilogy, although in concept it stands alone and quite different from the previous releases ‘Dreamland‘ and ‘Boy From Black Mountain‘. The album is strongly conceptual, taking its inspiration from the late 19th century story of Joaquin Murieta, a Mexican who went on a revenge spree after gold miners murdered his wife Rosita but melding this through the lens of a 1930s cinema noire, hard-boiled West Coasr pulp and the modern day depictions by comic book artist Danijel Zezelj that make up the accompanying booklet. The result is a swirling blend of big-screen cinema-graphic instrumentals that can zoom down into up-close and intimate songs that have Carpenter half singing, half whispering threateningly into the listener’s ear.

‘Murieta’s Last Ride’ opens the album in a chaotic way, the ghostly voice of Murieta crying out for his lost love with a despairing “Rosita“, whilst an unsettling piano beats out a death march. Jaws harp, harmonica, and blasts of mariachi music swirl around – fading in and fading out – to give a broad-brush sense of Murieta’s emotional confusion. ‘These Wicked Things‘ takes that confusion and melds it into a figure of death in human form, ready to make a satanic pact: “I looked to the horizon and a vision barely seen” sings Carpenter as drums strike up a martial beat, adding “She took my hand and whispered / would you care to ride with me / I heard a thousand sirens all calling your name / As you wrapped yourself around me / and we rode into the flames“. In the booming bass and unnerving strings there’s a hint of ‘Wicked Game’ around this song. ‘Bad Motel’ is all stripped down basic rock and roll, which shivers with a knife sharp guitar riff and deeply rumbling saxophone interjections.

Elsewhere the album staggers through a Sergio Leone betrayal scene on ‘Rosita (Tango)‘, full of passion and a South of the border vibe, but given that disturbing edge which runs through the album by Brian Carpenter’s high and lonesome whistling like the spectral call to self-destruction. ‘The Last Man‘ offers yet another apocalyptic vision – as over a country-rock accompaniment Carpenter half narrates half sings a pulpish noire of lost love and the obsession it has invoked, it sits somewhere between Raymond Chandler and Quentin Tarantino.

‘These Wicked Things‘ is an excellent album, buzzing with ideas and unrelentingly following its dark muse. For all the changes of musical style it is undoubtedly the purest Americana – and a twisted concept album for our times.

Death, revenge, passion, and a spectral hand playing with the pieces.