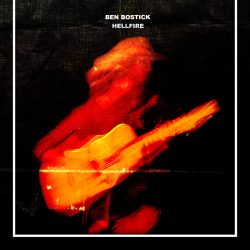 Easy to dismiss at first listen as the kind of low-grade dirty country rock mastered and simultaneously lampooned by Jeff Bridges in his 2009 Oscar-winning performance as ‘Bad’ Blake in Crazy Heart, ‘Hellfire’ should not be so quickly thrown to the dive bar wolves. Just as Blake, with the help of T Bone Burnett and Ryan Bingham actually had some fine songs, so has South Carolina’s Ben Bostick, once you overcome any initial misgivings based on the drinking and shagging first impressions of the song content and dig a little deeper. He has some killer riffs, not to mention genuinely dark moments of disenfranchisement and what it means to be marginalised in the American South.

On the subject of comparisons, there is an element of Dale Watson to Bostick’s approach, especially his sense of humour, which is of the type that shines through in his darkest moments. Album opener ‘No Show Blues’ is a perfect example, a psychiatrist’s wet dream of not showing up for work in favour of prescription drugs, guns, bars etc. As the album progresses you start to realise that the Dale Watson comparisons don’t end with song structure. Bostick’s voice is a dead ringer for the old Texas trucker.

There’s some fine work on show here, including incredible honky-tonk piano by Luke Miller and the band which this Santa Monica Pier busker has put together since the release of last year’s acclaimed self-titled debut is hot stuff. Worth mentioning is that Bostick has taken a somewhat unconventional approach to the recording of the album. He and producer John Would (Warren Zevon, Fiona Apple) went for a raw edge production to match the songs, in this case recording the band live without headphones using strategically placed mics to capture a live feel on record. The results are palpable and provide an ounce of extra menace to this Hellish affair. Songs such as the outstanding ‘It Aint Cheap Being Poor’, bar-room boogie ‘How Much Lower Can I Go’ and moody, effect-laden ‘The Outsider’ cover the whole spectrum and Outlaw Country is alive and well and busking in California.

‘Hellfire’ is a threat to safe suburban family life, a lashing out at the establishment and a damn good rock n roll record. It’s whiskey for breakfast and it’s dancing with the devil. Bostick writes songs that sustain the little man as he wrestles with the protectionism of a pipe dream and right now America needs men like him to stand up and be counted.

Outlaw Country for the next generation