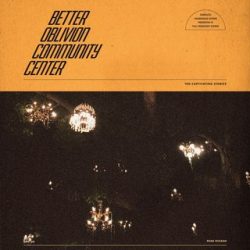 Phoebe Bridgers is definitely not one to shy away from collaborations. After finishing a tour with female supergroup, Boygenius, she turned her attention to working with Bright Eyes main man, Conor Oberst. Sometimes these collaboration projects can feel a little bit half-cocked and can sometimes sound like the artist’s work that wasn’t good enough to make the cut on their own albums. Thankfully this album doesn’t follow suit. Featuring musicians from Yeah Yeah Yeah’s and Jack White’s band, the pair have gone all out to create what really is a treat for your ears.

The uplifting yet melancholic ‘Didn’t Know What I Was in For’ looks at the world in a sarcastic manner, from the point of view of somebody working a part-time job that they don’t really want to be in. Really capturing the normalities in everyday life. ‘Dylan Thomas’ is the lead single for the album, an upbeat, feel-good track with big and loud guitar sections from Yeah Yeah Yeah’s guitarist Nick Zinner. Definitely, musically a track that you would not expect to hear after ‘Stranger in the Alps’, Bridgers’ 2016 debut release, but lyrically very typical Bridgers. ‘Service Road’ is led by Oberst’s moody-esque vocal. Lyrically, a real highlight of the album. The first line of the song “You should really call your brother, somebody put up a picture where he can’t stand” points you in the direction that this song is about caring for family and making sure they’re thinking straight and not taking part in activities that they could regret when in a sober state. This track has links to the death of Oberst’s brother.

‘Exception to the Rule’ almost nods in the direction of 80’s indie and pop music. Big dark synth lead lines and Bridgers’ spacey vocals in the verse create quite an intense atmosphere. The haunting ‘Chesapeake’ is more recognisable as something you’d expect to hear one an Oberst & Bridgers collaboration. Bridgers’ takes the lead, singing “I was all covered in sound, Earplugs so it wasn’t loud, swallowed up by the crowd, I didn’t know what they were singing about” representative about watching a heroic musician or band as a kid, not understanding what the songs were about, however still loving the music. ‘Big Black Heart’ gets your head nodding. Lyrically talking about being influenced by a higher power in a relationship setting. Reminiscent to Bridgers’ hit ‘Motion Sickness’ which was openly written about her time with Ryan Adams.

Better Oblivion Community Centre have gone all out on this release. A really superb collection of songs. This album could so easily have been a melancholy emo masterpiece from start to finish, which would in no way have been a problem, however, it is refreshing to hear Oberst and Bridgers step away from their acknowledged styles and release an uplifting and at times, joyful album.