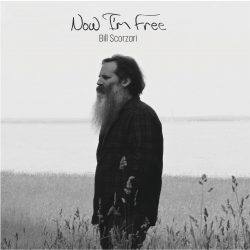 Once or twice a year, an album rolls onto the scene that is quickly and widely hailed as a game-changer. But if ‘Now I’m Free’ scores a few remarkable goals, it doesn’t, at least for this reviewer, kick the ball clear out of the stadium. First, the bare facts: Bill Scorzari’s third album is a 15-track, 74-minute marathon of fairly mainstream roots/Americana music, and is – to quote him – a result of  “three years’ introspection and contemplation of the human condition.” To some, the sheer length of ‘Now I’m Free’ is maybe a little daunting, and that kind of aim might sound like it’s been culled from the back of a philosophy book, rather than being the publicity blurb for a third album by a former New York trial lawyer.

However, the range and skill on ‘Now I’m Free’ shown by its ten musicians, using instruments varying  from the dobro through to a fiddle, harmonica, mandolin, cigar box guitar, two types of steel pedal and Scorzari on the acoustic guitar himself, provide some rock-solid traction for such an ambitious project. So, too, do the sturdily structured, if fairly conventional, song formats that Scorzari favours throughout.

But musically, the real standout feature on ‘Now I’m Free’ is Scorzari’s voice. His gruff, halting style gives his singing the kind of authentic old-timer crackliness  that some male C&W and Americana artists spend half their lifetime trying to acquire – and Scorzari has it in spades.

What is arguably more a dealbreaker for potential listeners is the album’s predilection for sweeping mystical generalisations and/or world-weary philosophical lines like:

“We are all so fragile, we are the children of the burning stars of eternity.”

Whether such a concentration of deep thoughts is your cup of tea or not, maybe lacing the album with some more humour or a few more dollops of sharp social observation –  both of which are, after all, two of the great qualities of Americana (and Country & Western) –  wouldn’t have gone amiss amidst all these profound reflections.

Instead, the only two more upbeat tracks, ‘Treat Me Kind’ and ‘Steel Wheels’ are all but buried under the album’s acres of intense, earnest, broad-brushed observations on – to try and use a catch-all – very general description for a vast subject area – the  harsh fragility/beauty/pain of the human condition. Scorzari relentlessly ploughs up and down this immense terrain for one faultlessly constructed, mid-to-slow paced song after another, one of which is over ten minutes long, another weighing in at over seven. When Scorzari sings on ‘Yes I Will’: “Don’t you stop me if you think I overstate the shape I’m in,” you can’t help wondering if he’s being a bit tongue in cheek. Probably not.

In a weird way and at a considerable distance, you could argue ‘Now I’m Free’  has echoes of those wonderfully labyrinthine, intensely introspective albums Goth bands like The Cure have sometimes turned out, which took a quantum leap towards listenability thanks to a backbone of really well-written songs. Speaking from personal experience, you either completely bought into that kind of music because you could identify with and lose yourself in its general angst, or you steered well clear – because if you weren’t a fan, it felt like you were wading through some sort of emotional treacle.

So given how heart-wrenchingly sincere, complex, painstakingly crafted an album like ‘Now I’m Free’ is, it’s definitely worth a listen. But choose your moment.

It’s maybe recommendable to decide if there’s anything less mentally and emotionally challenging in the same period of time – maybe it’s Scorzari’s New York connection, but watching three or four episodes of ‘Friends’ back to back is the first thing that comes to mind –  that you’d maybe planned on doing too.  Because, and this is arguably both its strength and its weakness, ‘Now I’m Free’  is not to be taken lightly.