Celtic Connections is well known for its set pieces – curated concerts gathering a wealth of musicians together. Transatlantic Sessions began as a television programme but its live incarnation was premiered at Celtic Connections almost two decades ago while Roddy Hart’s Rambling Roots has grown in stature over the years as it has celebrated various artists, events, albums and places, this year’s celebrant being Bruce Springsteen. By comparison, Caledonia Soul is a mere whippersnapper, the brainchild of Ross Wilson and first performed in 2018. It’s a much more nebulous affair than Roaming Roots, the basic premise being that Wilson’s band, Blue Rose Code, are the equivalent of The MG’s back in Stax touring days. It allows the guest artists to “curate the evening and perform re-worked versions of our own favourite songs along the Celtic theme, but with a soul band,” as he explained in an interview last year.

Having been performed at the Edinburgh festival, at last year’s Celtic Connections and in London, Caledonia Soul is certainly bedding in and it was no surprise to see The Old Fruitmarket almost filled to capacity on a cold and dreich Thursday evening in a late night slot. The setlist has been a moveable feast so, although the guest stars were known in advance, there was no way of knowing what we were about to receive. Wilson himself kickstarted the proceedings as the 11 piece band filed on to stage (band, string section and backing singers) and roared into a vivacious rendition of Del Amitri’s ‘Kiss This Thing Goodbye’ before demonstrating how eclectic the show would be by singing ‘What’s Love Got To With It’, a Tina Turner song indeed but written by Graham Lyle (one half of Scot’s “pop stars” Gallagher & Lyle). Wilson was obviously having fun, goading the players on and giving it all on vocals as the band switched from the exuberance of the Del Amitri number to the slinky soulfulness of Lyle’s.

Wilson reappeared throughout the show and as the guests came and went the band shuffled and reshuffled into various guises as the night progressed. Eddi Reader, along with her hubby, Trashcan Sinatra’s John Douglas, was full of Glasgow gallousness in her introductions and sang Boo Hewerdine’s ‘Patience Of Angels’ wonderfully, then a fourth-century song about a cat called Pangur Ban (the folkiest song of the night and sounding like a Glasgow hoolie) and an incredibly moving ‘My Favourite Dress’, a song written for an aunt with dementia. Douglas meanwhile sang a wonderfully elegiac number drawn from The Trashcan Sinatra’s catalogue. Karen Matheson of Capercaillie opened with Dire Straits’ ‘Brothers In Arms’, the band evoking the misty mysteries of the original and then dived into The Blue Nile’s ‘Happiness’. She appeared later expressing her delight that, for a change, she wasn’t  singing in  Gaelic as she stormed into KT Tunstall’s ‘You’re Not The One For Me’ and then Annie Lennox’s ‘No More I Love You’s’.

An honorary Jock for the night, Liverpool’s Robert Vincent opened with a Travis song, ‘Flowers In The Window’ before bouncing into a cracking and crowd-pleasing ‘Stuck In The Middle With You’. He was allowed one of his own songs later on and then he sang a song requested by Ross Wilson for the night, Lewis Capaldi’s ‘Someone You Love’, evidence of Wilson’s magpie love of all music and delivered by Vincent with a fine sense of soul. 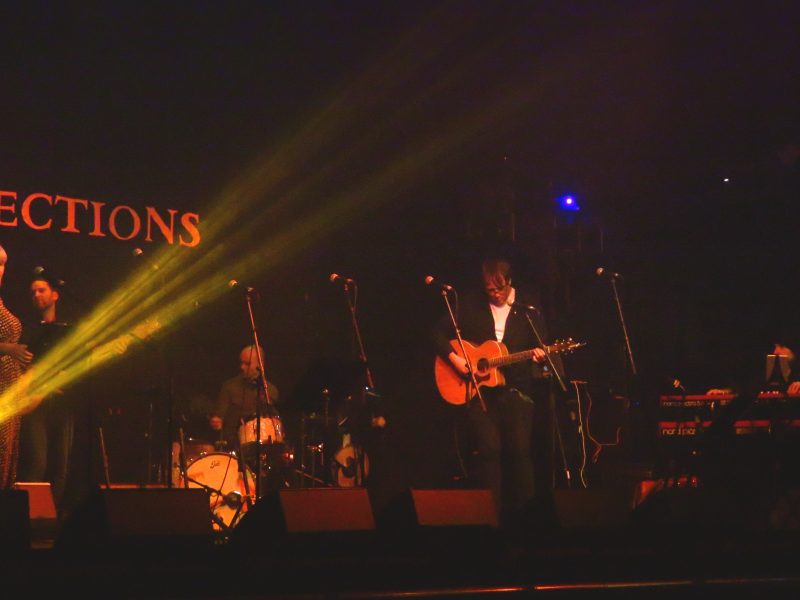 The best moment of the night for this reviewer was when Wilson opened the second half with an incredible rendition of John Martyn’s ‘Fine Lines’. Backed by the string quartet, this was just shiveringly awesome. However there was also a grand delivery of ‘Grateful’ with the band playing a slight reggae beat along with some Stevie Wonder synclavier funk, and then, for the closing song of the night, all were assembled as Wilson led the band into a truly raucous rendition of ‘Sunshine Of Your Love’, written of course by the late Jack Bruce of Harmony Row, Govan. The crowd were on their feet by now as the band roared on.