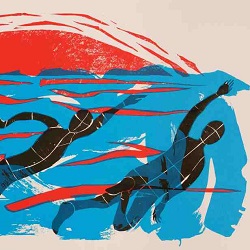 Whichever way you look at it ‘Before there was Air‘ is the very definition of slow-folk. There’s the simple chronology of the release which is Boa Morte’s third album in a mere 17 years – actually a few longer than that if you add in the time it took the band to recover the tapes of their first album when their first record company went bankrupt – and there have been nine years since Boa Morte’s second album.  Then there’s the sound of the album – stately is not the half of it: ‘Before there was Air‘ is an album that has something to say and isn’t going to be hurried whilst it makes its statement.

This stripped back – and yet paradoxically multi-layered – album opens on ‘A Sound‘ with an abrupt introduction, a lone quavering voice intoning “Out to the West just as the sun sets” before the first notes chip in to bolster the words as they run out like the last frail gasps of life, and gasps that are almost incoherent in their perplexity “On, on to the bridge, waiting for to be found again, my friend, unheard yet drowned in sound“. With the sparse accompaniment of guitar falling in and out of audibility, and melancholy piano chords filling the spaces, it’s a song that has a haunted quality to it – which is just emphasized by the long coda of analog synthesizers and repeated piano phrases before a final creaking as of an opening – or perhaps more likely closing – door. It’s quite an opening musical statement, an invitation into a specific world of sound, that drifts directly into the hypnotic ‘Sleep, before the Landslide‘, which evokes a very personal connection with nature, and a listless shuffle along a shoreline. Which itself feeds straight into ‘Ships Passing‘, a tender doom-laden duet which hints at a potential double drowning – whether by intent or accident.

And so the album progresses; there is a constant flow from song to song; really the album is all one piece with the merest hair breaths of pauses between the portrayal of emotional responses to the linked scenes, linked feelings, linked thoughts. For all its apparent seguing linearity ‘Before there was Air‘ has a dreamlike stream of consciousness to it, scenes fade in and out of focus, time-shifts, light glimmers and is then obscured by clouds. And with it all there is precision of placement of every note – this guitar part just here, and no further, now there should be gentle percussion, and now it should stop, and round we go again as instruments and vocals briefly return, or melody lines switch from one instrument to another.

If it wasn’t such a stable structure you’d swear it was ramshackle and barely able to stand under its own weight. Boa Morte have not produced a lightweight confection; this is an album that requires an effort to work oneself into it – no easy anthems or bouncy sing-a-longs here.  Spin it just the once and with only half an ear and one could be fooled into thinking its pretentious nonsense. But allow it to have its way, sink into the affectations and literary conceits, and there’s a richness to be found.

Boa Morte return after nine years with a disturbing dream of an album.