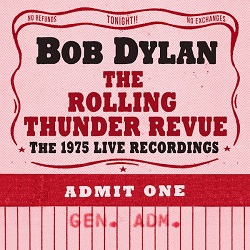 In many ways it was not the best of times for Dylan – having bared his soul on ‘Blood on the Tracks‘ he’d found a release in a whole new musical direction – a direction which would eventually lead to the album ‘Desire‘. Having helped out Roger McGuinn on his abortive ‘Gene Tryp‘ project – which delivered such landmark songs as ‘Chestnut Mare‘ – Jacques Levy had now upgraded to being Dylan’s songwriting buddy. Dylan had further found in Scarlet Rivera his new sound – wild gypsy violin that added drama to the new songs. So, this is Dylan emotionally drained, with sufficient writer’s block to require a songwriting collaborator, and scrabbling around for a new direction to immerse himself in.

The final piece in this jigsaw was that Dylan had reportedly been dissatisfied with his last tour with The Band – it may have been a huge success but Dylan felt disconnected from the live experience by the scale of the gigs. It was this confluence of frustrations that led to the bold idea for the Rolling Thunder Revue. Why couldn’t the music be more fun and spontaneous? Just turn up somewhere fairly small with a band of musical buddies, put up your metaphorical tent and present a musical carnival for the discerning fans ? It’s claimed that Dylan even saw himself as optional in this outfit – he could take time-off and someone else could replace him as the focus and the whole shebang could continue to wheel on its way. This, of course, never happened, but with Dylan’s conspirators in the Revue including Joan Baez, Roger McGuinn, and Jack Elliott is wasn’t such an impossible dream.

This new boxset sits outside of the Bootleg series, and has been released to complement the new movie on the Revue by Martin Scorsese, and consists of a fairly extensive 14CD collection. These gather together the live shows of the first leg of the 1975 tour as well as selections from the pre-tour rehearsals and a “bonus” disc of rare performances. The rehearsals – which somewhat unusually were recorded – make up the first three discs, are an interesting blend of older material, folk and popular songs around which the band can gel, and also the songs that would eventually make up ‘Desire‘, but early forms of these in many cases – sometimes different words, sometimes different speeds and sometimes just not finished yet. Mixed in with these incredibly intimate recordings are Dylan goofing off, or discussing the shape of the songs, or which ones should be included in the setlist.

For all its apparent ramshackle nature The Rolling Thunder Revue was a pretty tied down performance – on any given night there were a couple of songs that varied but predominantly it was the same songs in the same order.  Not that they sound the same – there are very different takes on ‘Isis‘ and ‘Romance in Durango‘ for example. ‘Hurricane‘ is a key focus of the second set of each concert, Dylan’s outrage at the mistreatment of “an innocent man in a living hell” as strong as the counterpoint song in the first set ‘The Lonesome Death of Hattie Carroll‘ which forever curses William Zantzinger and the justice system that “handed out strongly, for penalty and repentance, William Zanzinger with a six-month sentence.” Two injustices ten years apart – not much changes around here, Dylan seems to be pointing out.

This is one large Dylan release that shouldn’t be missed – every recording of ‘Tangled up in Blue‘ is superb and thrilling. ‘Isis‘ fairly crackles with insane tension. ‘Knockin’ on Heaven’s Door‘ is a multi-vocaled treat. On top of all that it’s been issued at a great price – something like £4 per CD (depending on where you get it) is hardly extortion and makes up for the repetition of material that was previously released on ‘The Bootleg Series Volume 5‘ which covers the same section of the tour with choice selections. If there’s a fault it is that only Dylan is really represented – McGuinn chips in on ‘Heaven’s Door‘ and everyone gets a bit of ‘This land is your Land‘, but this only serves to emphasize that the likes of Joni Mitchell, who joined the tour for a few shows, have been left out when most listeners would surely have wanted to hear their contributions too. But – this is a Dylan box and it seems somewhat petty to argue that it has too much Dylan on it. It doesn’t, it’s just that it could have been even more.

Bob Dylan the superstar plays small venues and the magic gets captured on tape. Glorious.