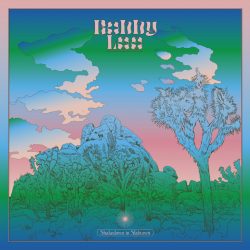 Philip Larkin’s poem ‘Days’ opens with the question: “What are Days for?” Being presented with an album of instrumental tracks might prompt a similar, ostensibly ingenuous question, such as, ‘What are instrumentals for’? In the case of ‘Shakedown in Slabtown’, Bobby Lee’s debut album, these instrumentals serve a variety of purposes.

It is tempting to suggest that these pieces might form a cinematic soundtrack to a specific genre of movie whose visual accoutrements include craggy rocks, cacti, heat haze and endless ribbons of tarmac which may be located in the states of Arizona or Nevada. Then again, maybe visual references are distracting and it is more a series of emotional rather than geographical states that are being expressed in this recording. These emotional states could be described as spacey, sinister, unsettling, sad and certainly freewheeling. Lee takes his influences from an eclectic palette using ‘Kosmiche Musik’ to inform the rhythmic pulse of some of these tracks and demonstrates the influence of Ry Cooder and JJ Cale amongst others. Being  Recorded on ¼ inch tape, a warm analogue feel pervades which intentionally includes the attendant hiss generated with this method of recording; liken it to the nostalgic crackling of vinyl as the needle eats into the grooves.

The album opens with the rambling, ‘Sacred Swimming Hole’ enveloping the listener in a melting haze. Dissonance and spacey instrumentation give an atmospheric feel to, ‘Listings’ whilst, ‘Palomino’ gives a passing nod to Ry Cooder and his ‘Paris – Texas’ film soundtrack. ‘Were you there when they crucified my Lord?’ has some tastefully distorted country guitar contrasting with the swamp rock sound of, ‘Join Me in LA’. Take these instrumentals and write your own story on them, they will give you space and inspiration to do so.

Instrumentals upon which to write your own story