Bad news for the first Thursday morning of 2017 sorry.  Don’t worry, Trump’s inauguration will be here before long to brighten things up.  Pitchfork report: “Bon Iver have canceled their upcoming European tour behind 22, A Million. Justin Vernon’s planned January 14 appearance on the Minnesota Public Radio program “A Prairie Home Companion” has also been canceled. In a note on the band’s Twitter, they write they have canceled “for personal reasons.” Bon Iver will refund all tickets, and have no plans to reschedule tour dates. Read the full note below. Scroll down for the band’s itinerary. 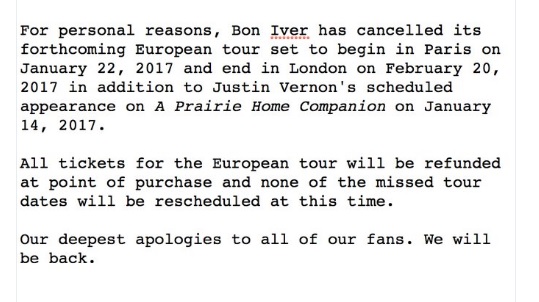 Yesterday, Bon Iver were announced as one of the many acts who will perform at the 2017 Coachella Valley Music and Arts Festival. The Coachella performance, as well as other future dates like a planned Primavera show, are still listed on the band’s website.

Pitchfork has reached out to Bon Iver’s representatives, who offered no comment.”