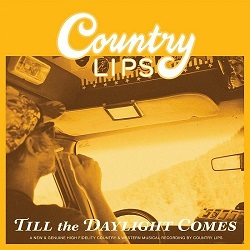 Country Lips – simultaneously entertaining and enchanting… although, on reflection, I can see that the term ‘enchanting’ may be at odds with the unsavoury preoccupations of several songs: heavy drinking, al fresco sexual encounters and impregnating groupies are hardly ‘enchanting’ in the Disney sense, but nevertheless the dubious subject matter is more than enough to raise a chuckle

The songs on this, the band’s second album, are delivered with the expected energy and ramshackle charm, but in light of a press release that name checks George Jones and the Louvins, ‘Till The Daylight Comes’ is far removed from the stable of authenticity suggested by the author. More accurately, the album riffs around the classic ingredients, messing dutifully with the imaginary line that joins country music royalty to Willie, Waylon, Merle, ‘Sweetheart Of The Rodeo’ era Byrds, Will Oldham and Phosphorescence. A case in point, and stand out track, the initially mournful but ultimately peculiar “Grizzly Bear Billboard” has the feel of an outtake from Beck’s ‘Odelay’ (had Beck never discovered hip hop and taken to country with a greater sense of certainty). Elsewhere the band deliver the goods via a carousel of lead vocalists and the ability to twist the unlikeliest of cadences into a swaggering honky tonk standard – take, for example, several spaced out facsimiles of Sir Douglas Quintet with songs like “Bar Time” and “Day In The Sun” lilting their way through tales of misspent spare time like a musical Jerry Springer – odd, but you can’t stop yourself listening.

Entertaining in small doses, when consumed whole the album is a little like going to an portrait gallery just to be confronted by wall upon wall of caricatures: amusing to begin with, but a bit unsettling after a while. Nonetheless, downplaying the albums impact on this basis would be to miss the point – yes it’s funny, but it’s subversive and actually a bit provocative too.

The new and intriguing album from Country Lips

0 thoughts on “Country Lips “Till The Daylight Comes” (Independent 2017)”