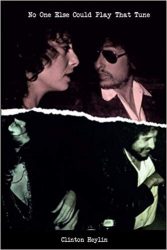 If, like many of us, you’re hoping a copy of Dylan’s “More Blood, More Tracks” might be among the presents awaiting your attention under the Christmas Tree, I suggest you drop the fat man in the red suit a little note, requesting this stocking filler as a late addition to the Christmas list. ‘No One Else Could Play That Tune’ is an outstanding piece of rock history. Writer Clinton Heylin has left no stone unturned in his attempt to bring us the definitive breakdown of the Blood on the Tracks recording sessions that resulted in Dylan’s 1974 masterpiece – and which, in turn, created the latest release in the highly acclaimed Bootleg Series.

This short monograph is also significant in that it marks the return of ‘The Wanted Man’ study series. The original series, created by Heylin along with John Bauldie, Dave Dingle and others in the early/mid 80s was designed to shine a rigorous light on Dylan’s written and recorded work and, with this monograph, Heylin has now relaunched that series.

The detail in this short book is astonishing. Heylin tracked down and interviewed every remaining eye witness to the original recording sessions, including the only musician, other than Dylan himself, to play on all the New York sessions. He also conducted a new, in depth interview with Ellen Bernstein, CBS A&R Rep and Dylan’s girlfriend at the time and all these interviews throw fascinating insight into the recording process and Dylan’s mindset throughout the recordings, both in New York and Minneapolis.

There is so much here for the completist. Heylin has researched and annotated Dylan’s original notebooks in which he wrote the songs for these sessions and he even includes snippets from the recording logs, showing how the tracks were laid down.

Perhaps one of the most interesting interviewees here is Phil Ramone, probably the main “supporting actor” in this fascinating drama. Ramone oversaw the New York sessions and had to see much of his hard work discarded when Dylan chose to re-record a number of tracks – you can feel the frustration but also get a sense of the respect and awe that Ramone felt for Dylan and his creative process, as Ramone says, “(The New York) Blood On The Tracks was an outpouring of the man’s life, in a very troubled time for him, and this was almost cathartic for him in the studio. It was incredible.” As Kevin Odegard, who oversaw the Minneapolis sessions, observes of Ramone – “Blood On The Tracks was a project about which he was rightfully proud and righteously pissed off for the rest of his life”.

This is a really excellent read. If you’re a Dylan fan it is a must have and, even if you’re not, this is one of the finest pieces of forensic analysis of a major album that you are ever likely to read – which makes it a must have! It may get a little dry occasionally, though the quoted passages from the various interviews always keep it on a human level and, at around 40,000 words in total, it all moves along very quickly. This is the perfect companion piece to both “Blood On The Tracks” and “More Blood, More Tracks”.

‘No One Else Could Play That Tune’ is a limited edition monograph and only available direct from the publishers, Route.

Outstanding historical analysis of one of modern music's definitive recordings.