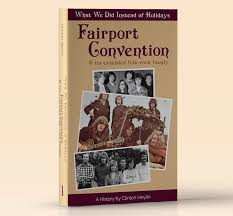 Given the number of books that have been written about the various members of Fairport Convention and the band itself, you might be forgiven for thinking that there’s very little left to say about them; but you’d be wrong, as Clinton Heylin’s excellent new book “What We Did Instead of Holidays” shows. Heylin is a rock historian of some note, having written biographies of artists such as Dylan, Springsteen, Van Morrison and others, as well as books on the history of bootleg recordings and the development and pre-history of Punk. He’s also, it would appear, quite the Fairport Convention fan. The book is factual and insightful but is clearly written by someone with a deep understanding of, and interest in, the band.
It is actually some 50 years since the founders of Fairport Convention, Ashley ‘Tyger’ Hutchings, Richard Thompson and Simon Nicol, first came together as a band, so this history is a timely look back at a set of people that really changed the face of British rock music and created the genre that became known as Folk/Rock.

What makes this different from other histories of Fairport Convention and its many members is that Heylin’s book sets out to chart what happened with the various founder members, and members of the early band line ups, when they went their separate ways; the book’s full title is “What We Did Instead of Holidays: Fairport Convention and its extended Folk-Rock Family” . This is a great concept for the book but it’s not entirely successful in its execution. Heylin spends a long time setting up the approach, which is understandable given the complexity of the band and its early development, but having established it very well he then, to some extent, squanders the concept by being a little blinkered in his approach.

Heylin concentrates his main efforts on the careers of the three founding members – Hutchings, Thompson and Nicol. This is understandable to a degree but it leads to an uncomfortable imbalance in the book. Hutchings has had a long and fascinating career in his pursuit of his electric folk dream and Heylin documents it extremely well – we get all the detail on his motivations, his sense that the direction Fairport were taking didn’t serve his own vision, the ideas that lead to the formation of early Steeleye Span, his frustrations with that band format that lead to the development of The Albion Band and its many spin offs and incarnations; it really is a fascinating tale in itself.

The career of Richard Thompson comes next but it’s nowhere near as interesting or colourful as Hutchins’, certainly not in the immediate aftermath of Fairport Convention. The reality is that Thompson’s early post- Fairport career consisted of session work and trying to establish himself as a solo artist. Obviously Thompson was deeply affected by the car crash that cost the life of drummer Martin Lamble and Thompson’s then girlfriend Jeannie Franklyn and that’s acknowledged and examined but it’s not until we come to the Richard & Linda era that this story strand takes off in any real way.

Then we have Simon Nicol and this is where the ‘Holy Triumvirate’ approach goes very amiss since the reality is that Nichol hasn’t really had much of a music career outside Fairport Convention. He has always been an important figure within the band and has worked on both Thompson and Hutching’s solo and band projects, but Nichol never tried for a solo career or to form his own outfits so he, inevitably, suffers by comparison in this regard.

We do get a lot of good detail on prominent band members like Dave Swarbrick and, of course, Sandy Denny but Heylin is almost dismissive of many band members. Early vocalists Judy Dyble and Iain Matthews are portrayed as lightweight and almost as if they were holding the band back. This was certainly the view of some of the band at the time but it was down to views on musical direction rather than any lack of talent and any sense of them being lacking in some way is particularly unfair in Matthews’ case, since he went on to have the most commercial success in the immediate aftermath of the post ‘Unhalfbricking’ era. The author is similarly quite scathing about Denny’s band ‘Fotheringay’ yet, in many respects, they were a better vehicle for her voice and writing than the Fairport Convention she left.

However, these anomalies aside, this is an excellent history of a band and its members that did much to craft a uniquely British sound in rock music. All the main musicians have been interviewed along with key members of the music industry at the time – Joe Boyd, Sandy Robertson, Bernard Doherty, Richard Williams as well as various insiders and friends of the band – Philippa Clare, Linda Peters/Thompson, Kingsley Abbott and more. You get a real understanding of how a few people, with a musical vision that wanted to embrace British influences, rather than just adopt American styles, were able to shape a whole section of our music industry. It’s not unreasonable to argue that, without Fairport Convention, we wouldn’t have the British Americana scene that we have today – because many of our home grown artists working in this genre do bring elements of British Folk/Rock into their own songwriting – and the nu folk and singer/songwriter scene in the UK owe a huge debt to this pioneering band who set out to drag almost forgotten traditional music back into the spotlight.

This is a very good book about a band and a period of our music history that is outside the mainstream and I would recommend it to any serious student of contemporary music. It’s also a thoroughly entertaining read.

Detailed history of early Fairport Convention and the genre it spawned.