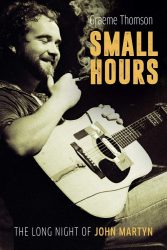 There is a passage in the prologue to this book where author Graeme Thomson writes about the sound of a John Martyn song – “He loved water and used it again and again as a lyrical and musical motif. It is the element that best fits the sounds he created: ripples, waves, currents, eddies; rocks plunging, stones skimming, whirlpools boiling. He drew fat circles in wet sand, surrendered his anchor to tidal drift, echoed the irregular patter of snow melt.” As someone who, long ago, fell under the spell of Martyn’s music, I don’t think I’ve ever read a better description of the magic he could create. Thomson’s book is full of insightful observation on the man and his music but it also delves into the darkness in his soul and paints a very full picture of a troubled man; the difficulties he faced in reconciling a past that, in his mind, lacked the love and attention he craved and how that came to impact on his own marriages and friendships.

This is a full-on biography packed with details of Martyn’s life and based around extensive interviews with people who shared that life; friends and family, particularly ex-wives and children, as well as musical friends and collaborators and the author’s own conversations with the subject. For all the weight of information and anecdote, Thomson has a wonderfully light touch that gives this book a degree of intimacy; almost making it feel like you’re reading a novel at times. The flow, particularly in his descriptive passages, is intuitive and you’re led through the book quite gently, which is just as well given that it does get progressively darker. That shift in Martyn’s life is, perhaps, the essence of this book. When we’re first introduced to the young Ian McGeachy he’s a boy of sunny disposition and golden curls, a boy that gives way to a talented, handsome young man with a mischievous smile and a prodigious talent; by the time we reach the end of this wild ride we have John Martyn, finished in every possible way, a victim of his own excesses and the damage that the life of an itinerant musician can do to the body and soul. It’s fascinating and, often, sobering stuff but, for all the darkness, and there is quite a lot of it as the story unfolds, you still feel that here was a man who was always in love with life if not always in love with his own life.

In an industry that has produced more than its fair share of mavericks, this book chronicles the times of a man who was the embodiment of that description. He really did forge his own path, pretty much on his own terms and people have always loved him for that, and that’s apparent too. In the publicity for this book, there’s a paragraph that says “Martyn lived his life the same way he made music: improvising as he went; scattering brilliance, beauty, rage and destruction in his wake”. This book makes that very apparent without ever losing sight of the fact that, while Martyn could certainly be a monster, he was also capable of acts of great kindness and, for all his faults, he’s still spoken of kindly and held in high regard. He was, for many, a mystery wrapped in an enigma and that will always be a part of his appeal.

Graeme Thomson’s excellent ‘Small Hours: The Long Night of John Martyn’ is a warts and all biography that also manages to be a very human story of a fascinating man.