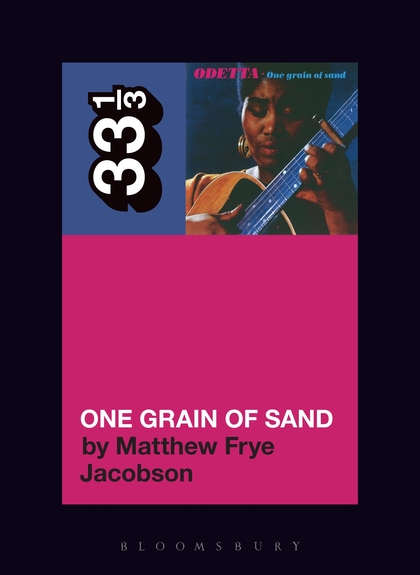 There are some records that just seem to find their place in history – Neil Young’s ‘Ohio’ and the Kent State massacre, U2’s ‘Sunday Bloody Sunday’ and The Troubles in Northern Ireland, Country Joe McDonald’s ‘Feel Like I’m Fixin’ to Die’ and the Vietnam War – popular music has always tied in with political and social events but none more so than the album ‘One Grain of Sand’, a one woman soundtrack to the American Civil Rights Movement.
Odetta Felious Holmes, who would come to be known simply as “Odetta”, was a classically trained vocalist who turned her back on opera and musical theatre to become one of the great American folk musicians. Released in 1963 ‘One Grain of Sand’ tied into her appearance at the March on Washington, where she performed and where Martin Luther King gave his great “I have a dream” speech. As Odetta herself said, “There was no way I could say the things I was thinking, but I could sing them”.

Mathew Frye Jacobson’s book, released earlier this year in the Bloomsbury Academic 33 1/3 series, takes an in depth look at this important album and its significance for the Civil Rights movement in the United States. Perhaps one of the most important things about this album is that there are no original tracks from Odetta herself on the record. As the author notes, the album “embodies Odetta’s approach to the folk repertoire as both an archive of black history and a vehicle for radical expression”. Bringing together a collection of field hollers, work songs, prison songs and spirituals, Odetta crafted an album that was as much about addressing social injustice as performing songs. Her music appealed to both black and white audiences and her raw, emotional voice drove these songs home with real conviction. As individual songs all of the tracks on the record are powerful statements in their own right but, gathered together in an album in this way, and released in such a significant year in American history, its easy to see how important this disc became for the Civil Rights cause and why someone like Martin Luther King would refer to Odetta as “the Queen of American folk music”.

Mathew Frye Jacobson is an historian who concentrates his research on issues of politics and race throughout American history and is particularly well positioned to analyse the importance of ‘One Grain of Sand’. As you might expect, he does a very good job, this book being both informative and fascinating, it reads almost like a screenplay – you could make a great movie from the story of Odetta and her involvement with the American Civil Rights movement, bringing songs of slavery and emancipation to audiences across America at a time when racial tensions were running particularly high. Jacobson lays it all out – the history behind the songs, in particular ‘Midnight Special’, ‘Moses, Moses’ and ‘Cottonfields’, the background to the Civil Rights movement and the major players at the time – it’s a book that really pulls you in and helps you to see just what a significant recording this was.

As well as being informative this is a very enjoyable read and a book that’s hard to put down once you start into it. You expect that sort of reaction when you read a good piece of fiction but it’s hard for a factual book to have the same impact; here we have an author who knows how to structure his writing and this is a very good piece of storytelling as well as a good forensic analysis. It wont appeal to everyone, it’s not a book that’s necessarily intended to, but if you have an interest in social history and the importance of folk music as a chronicler of the times, then this is a book that will greatly appeal to you. Perhaps the final word on this recording and its historical importance should go to Odetta herself, as Jacobson quotes towards the latter part of his book, “I’m not a real folk singer, I’m a musical historian. I’m a city kid who has admired an area and who got into it. I’ve been fortunate with folk music. I can do my teaching and preaching, my propagandising”.

A story of Social History celebrated in song