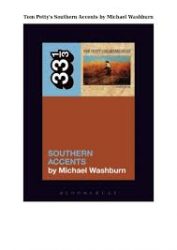 Here we have the latest in Bloomsbury Academic’s excellent 33 1/3 series. For those of you not familiar with these books they are, basically, album liner notes on steroids! For anyone that really wants to get inside a favourite record these books are among the most comprehensive analytical writing you’re likely to find. Artist biographies will often touch on details of certain keystone recordings, as the excellent Warren Zanes’ ‘Petty’ does with ‘Southern Accents’ (and Michael Washburn references Zanes’ book) but they will never go into the details that you find in these exceptionally well written books.
Michael Washburn’s ‘Southern Accents’, one of the newest releases in the series, continues in the tradition of this excellent forensic writing. Washburn is the director of programs at The New York Council for the Humanities, and his writing has appeared in many publications, including The New York Times Book Review, The Washington Post, The Los Angeles Review of Books and, in the UK, The Guardian, so you’d be right in thinking that he brings a certain academic rigour to his writing but this book is, in no way, a dry text book; Washburn is clearly a fan but one who’s realistic in his appraisal of this seminal but flawed album.

Released in March of 1985 ‘Southern Accents’ is widely seen as the album that Tom Petty made to stress the fact that he and The Heartbreakers were a Southern States band. In America they were widely seen as an L.A band, while in Europe they were often linked with the new wave scene coming out of New York and associated with acts like Blondie and Patti Smith. Petty set out to create an album that reflected the South that he and the band knew from growing up in and around Gainseville in North Florida.
That’s what he set out to record but that’s not what he ended up with. Petty is famously quoted as saying that, when he subsequently listened to ‘Southern Accents’ he could “taste the cocaine in my throat”. The mid 80s were the height of drug excess in the music business, especially in America, and many consider this project to have been derailed by Petty’s use of cocaine at the time but that’s just one factor. Throw in the involvement of Dave Stewart, co author on the excellent ‘Don’t Come Around Here No More’ and the less excellent ‘It Ain’t Nothin’ To Me’ and ‘Make it Better (Forget About Me)’, Petty’s anger and frustration with a number of things that lead to him punching the wall and pretty much destroying his hand in the process (at one point doctors thought he’d never play guitar again), the decision to produce the record himself (aided by Mike Campbell), the decision to record the album at his home studio (meaning that he couldn’t get away from the recording until it was finished) – Washburn documents and analyses it all and reveals a picture of an album that was meant to re-state the band’s creative credentials but sent them into a spiral of poor decisions, ultimately culminating in the decision to tour the album (the ‘Pack Up the Plantation’ tour) against a backdrop of the Confederate Battle Flag! Petty had sought to acknowledge his Southern roots and ended up alienating large sections of his audience instead.

This is a great read that digs hard into the background of the making of the album. Washburn talked extensively to Heartbreakers Mike Campbell and Benmont Tench and to many others in and around the Petty camp at the time of the recording. He was scheduled to interview the man himself but, sadly, Tom Petty left us before Washburn could meet with him. In fact, this book doesn’t need Petty’s input – his thoughts and reminisces about the writing and production of the album have been well documented elsewhere and Washburn draws on this information quite liberally but where this book scores is in setting the album into the social context of the time and seeking to understand Petty’s ambitions for the album and the band at that point in their development. The failure of the album and the misunderstanding of Petty’s motivation that grew around the album’s release could have destroyed a lesser band but Tom Petty and The Heartbreakers were able to put this period behind them and move on to make better records – and to distance themselves from their southern roots in the process. Through Michael Washburn’s writing you can start to see the album as a cathartic process that needed to happen; a skin the band needed to shed to move on. And, in understanding that, you can see the record in a new light and appreciate it in a different and more interesting way. That’s what good writing does – it makes you appraise and appreciate things in a different way and this exploration of ‘Southern Accents’ helps you to understand that this is the album that sparked Petty’s reinvention.

This is a book that every Tom Petty fan should read – but you don’t have to be a fan to appreciate it. Washburn has written an assessment of the creative process that anyone could appreciate. Creativity is not just about the great artistic successes; it’s often just as well served by the flawed visions as the realised masterpieces, something that Michael Washburn clearly understands and conveys through this book.

A comprehensive look at a fascinating album