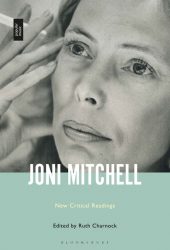 This book made its debut in hardback in January of last year and now gets its awaited paperback release. Ruth Charnock, Senior Lecturer in English at the University of Lincoln, has pulled together a fascinating collection of essays and literary studies on a wide range of subjects connected to Joni Mitchell. From her guitar playing technique to her position as a feminist icon, this collection of writings, from various academics working in the fields of popular music and literary studies can, at first glance, look more than a little daunting. Divided into three parts the book deals with ‘The Breadth of Extremities: Voice, Instrument, Feeling’ (Part 1), ‘The Only (Black) Man in the Room? Mitchell’s Milieu’ (Part 2) and ‘Busy Being Free: Love, Time, Feminism’ (Part 3), so the casual reader will already be feeling a little intimidated. Delve into the book and you’re greeted by chapters/essays with titles such as ‘Both Sides Now: Voice, Affect and Thirdness’, by Joanne Winning and ‘Oh Borderline: Joni Mitchell’s Aging Voice as a Site of Queer Resistance’ by Emily Barker – weighty stuff, yes, but there’s a lot of fascinating fact and information contained in the book if you can move past the academic focus.

I’m not a Mitchell fan, though there are albums and tracks I like, and I recognise her importance as an artist and as a pioneer and developer of that Laurel Canyon sound, but there are many who are interested in her both as a writer and performer as well as in her significance as a feminist and it’s that section of her fan base who are likely to get the most from this collection of writings about her.

As noted above, the third section of the book is given over to Mitchell’s position as a feminist and you get essays like Pamela Thurschwell’s ‘Here’s a Man and a Woman Sitting on a Rock: Joni Mitchell, Margaret Atwood and Irritable Feminism’, which makes direct comparisons between Mitchell and Atwood and how they both draw on a critique of patriarchy in their work. It is quite dry and might not appeal to everyone but, in this same section, we also get an essay from the books editor, Ruth Charnock, on Mitchell’s album ‘Blue’ and it’s fascinating to read. ‘The Only Thing That’s Never Going Away: Still Listening to Blue’ does pretty much what it says and lays out the case for the endurability of ‘Blue’ as an album. Charnock’s writing does approach the subject from a feminist angle but it’s not exclusive and her dissection of the album and her different interpretations of it at different times in her life is genuinely interesting and, often, very perceptive. It certainly made me re-visit that particular album and listen in a different way.

Elsewhere we have Gustavus Sadler’s enjoyable ‘In Search of Lost Chords: Joni Mitchell, The Last Waltz, and the Refuge of the Road’ that takes a look at Mitchell’s contribution to ‘The Last Waltz’ as well as her appearances at various festivals around that time, and Howard Wilde’s ‘Tangled up in Blue: The Shadow of Dylan and Stylistic Swerves in Early Seventies Joni Mitchell’ that deals with the “female Dylan” tag that Mitchell earned early on and that, rightly, annoyed her considerably. The chapter takes a look at the Mitchell/Dylan dynamic and how they’ve both benefitted and suffered from the comparisons.

This book is academic in its approach to its subject but that doesn’t make it uninteresting for the casual reader, though you do need to be something of a Joni Mitchell fan to get the most from it. What it does offer are some fascinating insights into her work and into the artist herself and an assessment of an often enigmatic character that goes some way to explaining the enigma. A genuinely fascinating read.