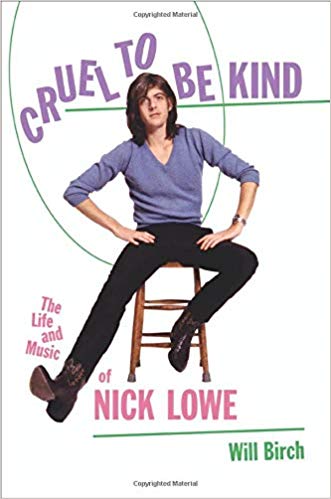 My first thought on getting this book was that Nick Lowe wrote some good songs and has been around the music scene for a while, so this could be an interesting read. By the time I’d finished the book I was feeling grateful to have walked this earth at the same time as the music legend that is Nick “Basher” Lowe! Nick Lowe has built a fascinating career in music without ever really becoming a major rock star – yet, when you see his accomplishments laid out on paper, it’s hard to believe that it’s all the work of one man; and a man who is just a musical footnote to many.

Starting out in various bands that developed at Woodbridge School, where he was a pupil, he eventually settled in Kippington Lodge, the band that morphed into Brinsley Schwartz (named after their lead guitarist), victim of one of the most famous hypes of the seventies music scene, when British journalists were flown to New York to witness their showcase gig at the Filmore East, an event that became a byword for PR disasters. Bruised and battered, the band immersed themselves in the emerging pub rock scene and became one of the shining lights of that movement before Lowe quit the band to launch a solo career (and the rest of the band went on to back Graham Parker as The Rumour).

So far, so unremarkable – but then the true musical genius of Nick Lowe starts to emerge as he makes a name for himself as one of the top music producers of the 1970s and 80s. This is the man who produced what is officially recognised as the UK’s first punk single (The Damned’s ‘New Rose’) and then goes on to produce albums for Elvis Costello (eight in total, over a ten year period), The Pretenders, Squeeze, Dr Feelgood and many more – Lowe pretty much defined the sound of 70s/80s UK power pop while also producing for American acts like The Fabulous Thunderbirds and John Hiatt. Along the way he made time to write and record a string of his own hits, including ‘Cruel to be Kind’, ‘I Knew the Bride’, ‘I Love the Sound of Breaking Glass’ and, of course, what would become his biggest earner – ‘What’s so funny ‘bout Peace, Love and Understanding’, as well as writing songs for the likes of Paul Carrack, The Mavericks, Johnny Cash and many, many more. He also found time to be in not one but two “Supergroups” – Rockpile, with Dave Edmunds, Terry Williams (from Welsh rockers Man and who would go on to be part of Dire Straits) and Billy Bremner (who had been in Lulu’s band The Luvvers and Neil Innes’ Fatso) and then Little Village, with American rock royalty John Hiatt, Jim Keltner and Ry Cooder. And we’re not even out of the 1990s yet!!!

Will Birch’s excellent book lays it all out in some detail in what is described as a sort of “unauthorised, official biography”! Nick Lowe has always said he would never release a memoir but mentioned to a journalist a few years ago that “the writer, Will Birch, is doing a book about me. I sort of disapprove of it”. Lowe wanted to keep his distance from the book, while willingly collaborating in interviews and access to his family history, because he didn’t want to be associated with a sanitised version of his life and work. It’s an approach that has really paid off because Birch has managed to paint a very detailed picture of a life lived entirely in music for some five decades, along with all the ups and downs of those turbulent times, without making Nick Lowe appear either too much of a saint or sinner. It’s a warts and all story in which Lowe emerges as a talented man who is not always the easiest person to live with, but who is a consummate collaborator when it comes to songwriting and making music.

The book brings you right up to date on a career that is still ongoing, as Nick Lowe enters into his seventies – referencing his tour earlier this year in both the US and the UK with American instrumental band Los Straightjackets. In recent years his songwriting has become more reflective and, often, more collaborative, with frequent trips to Nashville to work with some of the cream of established American writers; Lowe has always drawn heavily on American influences and this comes through much more in his recent work.

Will Birch is the ideal writer for this tale. Having been a part of the pub rock scene, as the drummer with the brilliant but relatively short lived Kursaal Flyers, he went on to be a songwriter and a producer himself before moving into music journalism in the 1990s. He has an easy writing style that leads you through the book in a relaxed and friendly manner, something that can be hard to pull off and which he does with aplomb. He has also written what many consider to be the definitive book about the Pub Rock movement ‘No Sleep Till Canvey Island’ (an excellent read, highly recommended) – so he has first hand knowledge of the same circles that Nick Lowe has moved in and access to all the right people when putting this biography together. The list of interviewees is almost endless but, as well as talking extensively to Nick Lowe himself, Birch also talked to the likes of Carlene Carter (the first Mrs Nick Lowe), Elvis Costello, Chris Difford, Daryl Hall, Ron Sexsmith, Curtis Steigers, Ry Cooder, Chrissie Hynde… the list is an extensive one full of music business luminaries.

This book has been so well researched that Birch was even able to tell stories about some of Lowe’s ancestors that Nick himself was unaware of! We don’t do spoilers – if you want to know what they were you’ll have to read the book – and it is a book well worth reading.

“Cruel to be Kind: The Life and Music of Nick Lowe” sent me scurrying to my record collection to dig out the Lowe albums I have and listen to them for the first time in a while – and there can be no better recommendation for a music biography than that. It also left me pondering why this highly accomplished musician, songwriter and producer isn’t more known and revered than he is – and Will Birch offers this answer for that key question; Nick Lowe was “never a superstar due to an unhurried work rate and a reluctance to play the fame game”. The music business needs more artists like Nick Lowe – and the biography business could do with a few more writers like Will Birch.

Will Birch paints a fascinating picture of a reluctant rock star