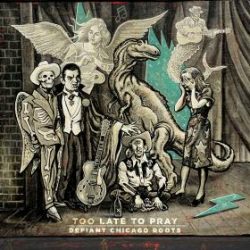 Bloodshot Records came into being 25 years ago with the release of a compilation album of ‘Insurgent Chicago Country’. In their own words, “It embraced the pathos and quotidian hardships of classic country with the energy and immediacy of punk.” Now, on their 25th anniversary, they have released another compilation to shine a light on the music that is Chicago’s “hope and hustle”.

‘Too Late To Pray: Defiant Chicago Roots’ features 22 songs and 22 different artists and any attempt to highlight stand out tracks will, inevitably, be a subjective exercise. With the caveat that any compilation of this nature is bound to feature degrees of diversity, there is an overall old time feel to much of what is on offer here. There are definite nods to old time classic country and honky-tonk. Listen for example to ‘The Sun is Going Down’ by The Family Gold and be reminded of Michael Nesmith sans Monkees.

‘Liza Jane’ by The Dyes has the sort of killer riff that Imelda May made her trademark in her early days, while Robbie Fulks invites reference to Dan Tyminski and Union Station with a great bluegrass track, ‘Lonely Ain’t Hardly Alive’, featuring the high quality mandolin and fiddle playing that one would expect when making this sort of outrageous comparison.

On the theme of soundalikes, Half Gringa is the songwriting project of Izzy Olive and probably features the vocal highlight of the compilation. With a lovely, meandering and mesmerising vocal performance, simple musical arrangements and a mournful and evocative violin, the unknowing listener could have tuned into First Aid Kit. This track is just one of many that feature wonderful female vocals that lift these songs out of the pack. Seek out the contributions of Big Sadie, Joybird, Freakwater and Kelly Hogan for evidence.

Comparisons to more familiar artists are used simply in an attempt to highlight the variety and styles of music on show in this compilation. Many of the artists will no doubt reward further dips into their work if these offerings are anything to go by. With a couple of exceptions this is an album full of decent tracks that serve as a great introduction to music from a city that may tend to go under the Americana radar.