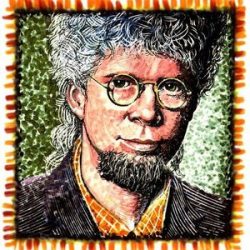 And if you’ve never heard of him, then, well, now’s your chance. Rolling Stone Country report: “In 2005, the Americana Music Association awarded Song of the Year to “Worry Too Much,” a grinding rock & roll gospel number that opens Buddy Miller’s Universal United House of Prayer LP. While the song contains all the earmarks of a classic Miller tune, its author was Mark Heard, whose intensely poetic lyrics radiated with Dylanesque flourishes and whose influence can be heard throughout Miller’s most raw, confessional work.

Twenty-five years ago, on July 4th, 1992, Heard suffered a minor heart attack onstage at the Cornerstone Festival outside Chicago. After finishing his set, Heard went into the hospital, stayed a week and was discharged with a clean bill of health. While out on a walk with his wife, Janet, and their 4-year-old daughter, Rebecca, Heard suffered a second heart attack and fell into a month-long coma. On August 16th, 1992, he was taken off life support. What Heard left behind, in addition to a grieving family, was more than 15 albums worth of introspective songs that would inspire not only Miller, but other influential songwriters such as Bruce Cockburn and Victoria Williams, and would turn up in tribute LPs such as 1996’s Orphans of God, performed by Olivia Newton-John (for whom he penned “Big and Strong” from her 1988 album, The Rumour), Michael Been (of The Call), Pierce Pettis and more.

While many of his early admirers can be found in the world of contemporary Christian music, Heard’s far-reaching influence has been reassessed with the upcoming tribute LP, Treasure of the Broken Land, with Buddy Miller’s intensely beautiful take on that title track leading the way, joined by versions of Heard’s songs from Rodney Crowell, Sierra Hull, North Mississippi Allstars, Sarah Potenza, Over the Rhine and more. Listen to Miller’s “Treasure of the Broken Land” and see the full track listing below.

“I start each day going into my studio and sitting in front of a Seventies Trident B Range recording console that belonged to Mark Heard,” Miller tells Rolling Stone Country. “I put my fingers on the faders, I turn the same knobs he turned, feel the same frustrations of trying to pull music out of it. I think about Mark a lot. He crammed a lot of gear into a tiny garage studio and made some of the deepest urgent music I know… still stirring me today.”

“The first time I heard ‘Treasure of the Broken Land,’ Buddy and Julie Miller were singing it at Mark Heard’s memorial service 25 years ago,” says the album’s producer, Phil Madeira. “I barely knew who they were, except that they were part of the Christian music world, which I was trying to escape from. I was dismissive until they started singing, and then I was enthralled. The song struck me as did their beautiful, broken blend. I understand that the song was written when Mark’s father passed away, and the lyrics address the loss in a poignantly sad way, citing the lack of closure in a perhaps conflicted relationship, yet hoping for reconciliation beyond the grave, if that’s possible.”

On the last few records Heard would make, he would ask Miller to add guitar parts and help engineer. But the connection was much more than just a musical one. “I became friends with a sweet, intense, humble, very funny man I learned much from,” Miller says with deep affection. “He challenged me and made me feel and think. I wonder what he would be doing now. He was always a few steps ahead. I don’t think he felt comfortable anywhere, and spoke of not being around this world long.”

Treasure of the Broken Land: The Songs of Mark Heard will be available June 2nd on Storm Weathered Records.

Treasure of the Broken Land: The Songs of Mark Heard track listing: