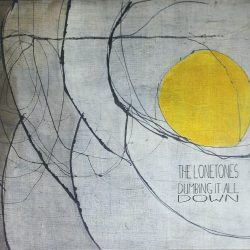 This is quite a hard album to review because it’s really an album of two halves. The Lonetones, hailing from Knoxville, Tennessee, are essentially the band of husband and wife duo Sean McCollough and Steph Gunnoe. They front the band and all the tracks on the album are written by them – but not together. So you get 6 tracks from husband Sean and seven from wife Steph – and they sound like they should be on two separate albums.

Steph Gunnoe’s songs are folk songs drawing on the Appalachian tradition and she tells a good story, especially on Depressed Area USA where she addresses the pride of the Appalachian people and their refusal to be categorised by a stereotypical view of what it means to live and work in West Virginia. Her songs are about the human condition; the battle of the traditional with the modern and how you find balance in a changing world. Gunnoe writes good folk songs, though they sometimes tip over into folksy and become a little twee – possibly not helped by her singing voice, which has that “little girl” quality that tends to divide audiences.

Sean McCollough’s songs are of a totally different nature, coming more from a rock base. His track Mr Rock ‘N Roll sounds to be celebrating the great Jim Morrison – “Hey Mr Rock ‘N Roll, who can you be, you stand up there blowing us away with your poetry. Hey Mr Rock ‘N Roll, does it feel right? Is it the darkness that makes you burn so bright?” Again, he writes good songs but there’s a tendency to start strong and then let the track settle into a more middle of the road sound.

The instrumentation on the album is very strong. In addition to McCollough and Gunnoe there’s another husband and wife team on the album –  Vince Ilagen and Bryn Davies who share bass playing duties and, between them, have played with such luminaries as Justin Townes Earle, Jack White and Guy Clarke. There’s also the very nice addition of cello on a number of tracks, played by Cecilia Miller, which gives some real breadth to the arrangements.

This is, apparently, The Lonetones fifth album and it seems strange that there isn’t one single track that they’ve written together. Listening to these songs it seems that Gunnoe’s writing would benefit from McCollough’s rougher, rock angled edge while his writing could do with some of Steph Gunnoe’s attention to storytelling and maintained structure. It’s a decent enough album but it doesn’t feel like a wholly coherent offering. Maybe it’s time to get those solo albums out of the way before they record the next one from the band.

A good collection of songs. But is it an album?