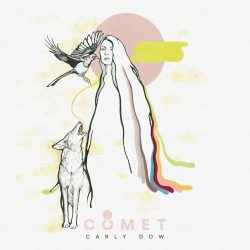 One thing that reviewing for AUK has taught me is that there are any number of great female vocalists out there. Carly Dow is one such and her album ‘Comet’ is beautifully sung from beginning to end. Dow is based in Manitoba and this is her second release after 2015’s, ‘Ingrained’.  ‘Comet’ is apparently the first to use a group of musicians, and it has to be said that they serve her well.  From what I have heard of her earlier material this is a move from pared down and minimal to a fuller sound.  If the prevailing mood is one of subtle mid-tempo then each track has its own little instrumental highlight.  Her Banjo is often to the fore; there’s a nice bass motif at the start of, ‘Like Coyotes’ and the Accordion distinguishes itself on, ‘Cut and Run’.  There are instrumental contributions everywhere that reward close listening.

The prevailing motif here is that of relationships – mainly lost it seems.  Whilst highlighting the physical or spiritual attractions of various partners none seem to end well.  The highlight is probably ‘Cut and Run’, with its tale of missing the opportunity to leave it all behind for the expectation of something promising to be much better.  It could not be said that there are any startling insights here and whilst there may be heartfelt sentiments the words are where the whole thing rather stalls.

Musicians and poets are often held to be the prime manipulators of language and there are many musicians who are described, or like to describe themselves, as poets.  So what do you want from your words; startling insights, the technical manipulation of the language, images that conjure so much more than the mere language or perhaps a deep look into another soul.   Maybe the subject of human relationships is so well worn that there is little new left to say or hear – it takes something truly insightful and original to make one sit up and listen.  I am not sure you will find that here although one can never deny the merit of another’s lived experiences.

There is a lyric sheet attached so for once it is possible to be clear about what is being said. Certainly  if the words may lack intrinsic merit then when they are put together with the music they do take on a life of their own.  In simple terms they form another part of an ear-pleasing musical jigsaw – and maybe that is the best way to approach them.

As a package this is a fine album.  ‘Ingrained’, Dow’s debut, was highly rated in these pages and whilst that is not hard to understand, I would not rate this offering that highly.  There is clearly a thread between the two discs though ‘Comet’ offers more and different musicality.  If you heard and liked the first you won’t be disappointed with this – if you come to it new then it’s a good listen on the basis of the playing and the vocals, though lyrically less than profound.

Fine playing and singing but no lyrical surprises