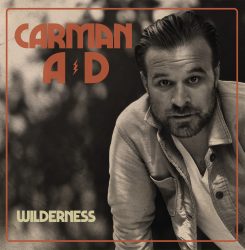 Did you hear the one about the musician who moved to Austin, Texas to start a career away from music? Well, that was never going to work was it. The musician concerned is one Carman A.D, aka Drew Carman, who, after 5 years on the road with old-time Americana band The Corduroy Road, gave it all up for a career as a greenspace/park designer.

Now, of all the towns to pick for a new direction, he chose the beating heart of Americana and, after some part time dabbling in the local music scene, 2019 saw him take the leap back into music full time. The result is Carman’s first E.P. ‘Wilderness’, a six-track piece of rocky, twangy, bluesy Americana.

’89 Johnstown’ is the single released to promote the launch of the E.P. and it is easy to see why. It is an upbeat piece of country rock with notable female backing, mid song guitar solo and honky-tonk piano wrapped around a lyric that recalls a natural disaster from 1889 that killed more than 2200 impoverished workers. Carman uses the disaster to highlight the ongoing plight of the American working poor who continue to suffer at the hands of the big companies and corporations. If it is folksy in its sentiment then the delivery is anything but.

The rest of the E.P. ranges from the bluesy harmonica driven ‘Birds Sing’, to the mid-paced twang of ‘Changed’ and the big bold chorus that defines the title track ‘Wilderness’. Carman manages to bring something a little different to the party with each of the six tracks, but the award for the most original goes to the closing track ‘Outro – Well Wishes from Chester B’ which features a spoken speech by a person unknown to a terrific, upbeat and bluesy musical accompaniment. Not only original but also highly infectious with each play.

Carman has wisely enhanced the package through his use of seasoned Austin session musicians and, if the E.P. lacks a certain something to lift it out of the pack, this remains a decent solo debut.