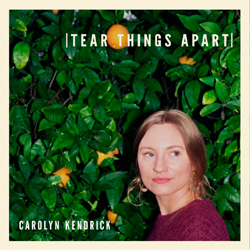 Apparently from a folk and bluegrass background, primarily as a fiddler, Carolyn Kendrick’s first release under her own name, hovers, not uneasily, between folk and slightly soulful pop. The six-song disc opens with the very tasty title track which has a Laurel Canyon air to it, one can imagine Linda Ronstadt singing this in her prime, the backing band are quite impressive with a solid organ groove and a fine guitar solo midway while Kendrick’s voice is very appealing.

Aside from the fiddle led ‘Little Lorrie’, a toe-tapping honky-tonk number which allows most of the band members a chance to shine with short solos, most of the disc follows in the footsteps of the opening number. ‘Stick Around’ has more of that seventies LA laidback vibe with pedal steel added to the mix while ‘Come With Me’ has an almost aquatic shimmer to it as the band rove around in the kind of folk jazz territory which Joni Mitchell pioneered. Kendrick’s delivery of the traditional song, ‘Silver Dagger’, is a delicate and delightful meditation with voice and guitar in perfect symmetry while her fiddle is the perfect adornment. The one fly in the ointment is the late night blues of ‘Mesquite Street’, a song which Kendrick delivers well, but which doesn’t fit into the overall flow of this rather sweet mini disc. Aside from that, an impressive debut.

A fine debut which hovers between Laurel Canyon bliss and earthy honky tonk.