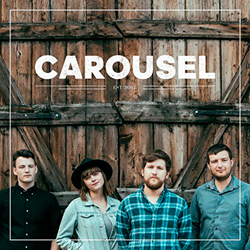 A youthful four-piece band from Southend On Sea, Carousel dive into the increasingly crowded pool of UK bands playing Americana on this, their debut recording. They hover around the radio friendly sounds of bands such as The Shires and The Lone Bellow although at times there is a tougher edge on show.

Show opens the show, a strident number which opens with an Eagles like guitar flourish. It’s stuffed full of energy and enthusiasm but it wanders away at times from that Laurel Canyon feel and is in danger of turning into a folk rock rave towards the end as Toby Shaer’s fiddle skirls away. Dead Horse is a rockier affair with a driving bass line and edgy electric guitar that tug on roadhouse blues memories although again the band take a folkier bend on the road when the fiddle comes in. One gets the sense however that this is a song which would sound pretty cool in a live setting.

Porcelain allows them to show a gentler side as mandolin player Sarah Holburn steps up to the mic for a ballad that swells as it progresses with her band colleagues adding some fine harmonies.  Throw Me To The Wolves is a skirmish of barrelling guitars, pummelling bass and thrashing drums with guitarist Thomas Eatherton cutting loose on the vocals and it’s certainly the most exciting cut here and perhaps the most fully realised. They close with the acoustic love song, Comfortable Skin, with Eatherton’s vocals well supported by harmonies from Holburn and Chris Hobart as the song gradually builds in its intensity from gentle ballad to full voiced fervour.

An impressive debut but this matchup of four keen individuals perhaps needs some time to simmer before we get a sense of their full flavour.

Impressive debut from youthful UK band with lots of potential