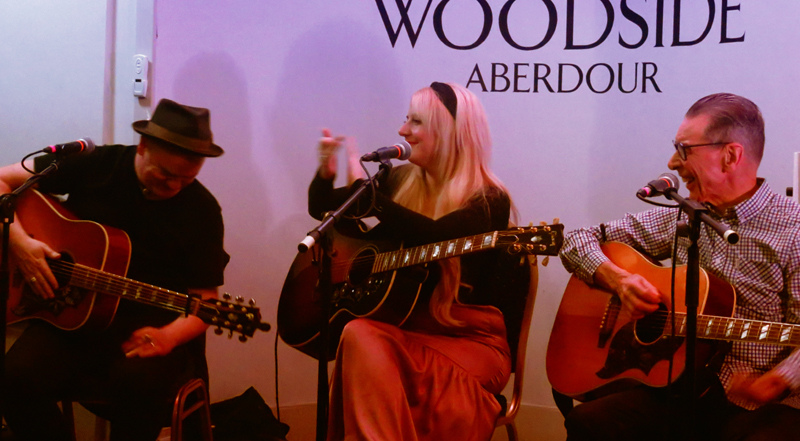 A new addition to the Scottish music scene, Cash Back In Fife is a weekend of music dedicated to the memory of Johnny Cash and in particular, Cash’s delight at discovering he had ancestors who had come to the new world from the ancient kingdom of Fife in Scotland. It’s the brainchild of Dean Owens, the singer songwriter from Leith who has previously released an album of songs sung by, written, or inspired by Cash. That album, ‘Cash Back (Songs I Learned From Johnny)’ led on to a successful Edinburgh Festival Fringe show and when Owens heard of Cash’s links to Fife, allied to his discovery of a relatively new music venue in the Fife village of Aberdour, well, something clicked.

Cash Back In Fife is not a “tribute” event. For sure, there were many Cash songs sung lustily (and reverentially) over the weekend, but the point here was to acknowledge the influence Cash (and his ilk) have exercised on several generations of artists with a particular nod in this inaugural event to artists with a Fife connection. Therefore there were performances from Fifers such as the legendary Rab Noakes, the infamous Fay Fife (of Rezillos fame), Kirstin Adamson (daughter of the late Stuart Adamson) in her guise as one half of The Marriage, and David Latto. Crime writer Ian Rankin (of Rebus fame), another Fifer, spoke of his late friend, the Fife born Jackie Leven, a tremendous (and tremendously underrated) artist.

The event was held in the comfy confines of The Woodside Hotel which has rapidly established itself on the Scottish gig circuit – the list of forthcoming acts displayed in the bar is quite impressive. The performances were on a small stage in the function room which had been fitted out for the occasion with portraits of Cash, the winning efforts of a local competition designed to celebrate Cash’s connection with the area and which was judged by Rosanne Cash. The effect was to have Cash in mind whenever one’s eyes strayed from the performance and, although this might be the drink talking, this writer is sure that some of the portraits had a more pronounced smile as the weekend progressed. 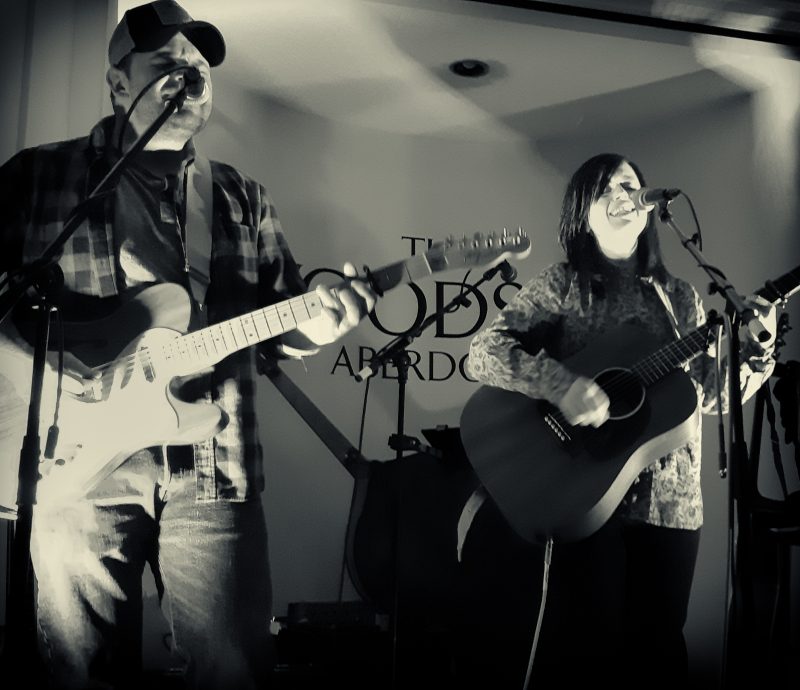 While Cash loomed large over the event, this was a multi faceted weekend. Martha L Healey, along with sidekick Al Shields, kicked things off on the Friday night. Her songs, mainly from her second album, ‘Keep The Flame Alight’, were excellent as were her explanations of the songs (along with some hilarious deadpan interruptions from Shields). Ending with a fine delivery of ‘Don’t You Think It’s Time’, a Tommy Collins’ song from Cash’s shelved and then exhumed eighties album, ‘Among The Stars’, Healey delved into a deep cut showing that our current generation are still supping from Cash’s well.

Dean Owens, our curator for the weekend, was next up with his current version of one of his many bands, The Celtabilly Allstars. Owens, all in black (a nice touch although the black leather jerkin was soon abandoned), was accompanied by his erstwhile double bass buddy from The Felsons, Kevin McGuire,  along with two stalwarts of his Whisky Hearts line up, guitar ace Craig Ross and trad fiddler, Amy Geddes. From the start of this inspired, ecstatic and invigorating performance, Owens dived headlong into Cashville. He sang a solo ‘I Still Love Someone’ before bass and guitar joined in for a wonderful ‘Sunday Morning Coming Down’ and then a fine and chunky rendition of ‘Big River’. So far, so Cash, but when Geddes came on to add her fiddle and vocals to ‘Strangers Again’ we were firmly in Dean territory and we were then treated to some grand renditions of ‘Dora’, ‘Elvis Was My Brother’ and ‘Up On The Hill’, dedicated to Owens’ late buddy, his dog Alfie. 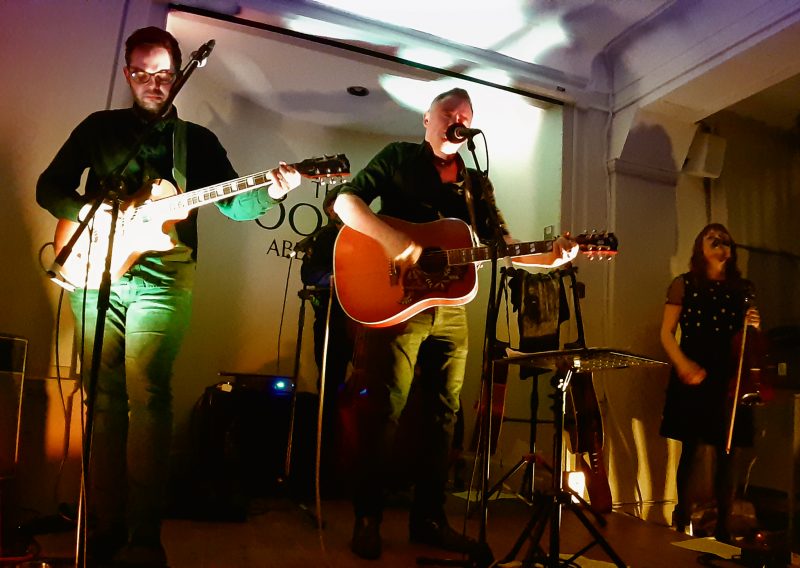 It was back to Cash as Martha Healey came back on for a spirited ‘Jackson’ before Owens sang his own tribute to the man on ‘The Night Johnny Cash Played San Quentin’ with Ross masterful on slide and then a deliciously dark ‘Delia’s Gone’. Cash believed for a while he had Cherokee blood in him (along with that rich Scottish vein), so Owens’ ode to native Americans, from his Buffalo Blood collaboration, ‘Reservations’, fitted into the mythology while the band’s interpretation of ‘Southern Wind’, the song which won Owens a song of the year award from the AMAUK was just awesome, ending in a squall of guitars. A host of influences were name checked in ‘Last Song’ before the proceedings came to an end with some real rockabilly slapping bass on ‘I Walk The Line’ and ‘Folsom Prison Blues’. 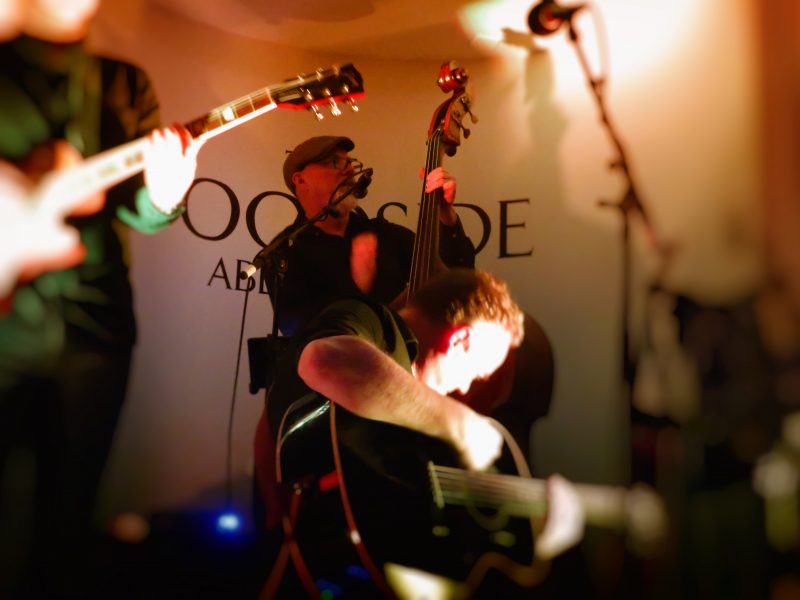 As an amalgamation of original and Cash related songs,  tying  together Owens’ love of Americana lore and his respect for Cash’s genius, this was hard to beat, especially as the band were pretty much on fire. However, they kept the best to last as they encored with a powerful and incredibly moving rendition of ‘Hurt’, the song which probably defined Cash’s last years. Owens voice reached into its depths as Geddes’ stabbing fiddle added the necessary drama, it was really just magnificent and a fitting tribute to the man in black.

Crime writer Ian Rankin toured and recorded with the late Jackie Leven, the pair becoming friends after Rankin portrayed his hard-bitten Edinburgh cop, Rebus, relaxing by listening to Leven. Ostensibly, Rankin was here to talk about Leven’s album, ‘Elegy For Johnny Cash’, but most of the show consisted of him reminiscing about Leven and reading some of his favourite lyrics, the readings accompanied by Dean Owens on acoustic guitar, extemporising wonderfully. Leven was indeed a maverick with a convoluted career and a complicated personality, but as Rankin read from the splendidly titled ‘Absolutely Joan Crawford (With A Bit Of Tilda Swinton On The Side)’, one couldn’t help but admire the man who wrote such words. And when Rankin then reminded us of the classic Leven yarn where he announced the death of Sting on a Kirkcaldy train, then you just have to love him. Like Cash, Leven sang of “embittered men” and Rankin, with Owens, brought him briefly back to life this afternoon. 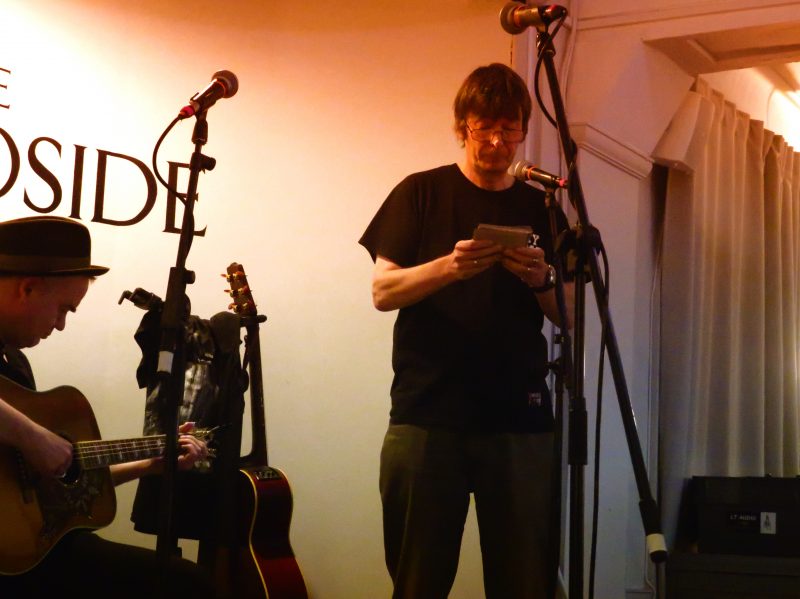 Billed as The Ring Of Fire Songwriters Circle, Owens was joined by the Liverpudlian singer songwriter Hannah Rose Platt along with Rab Noakes, a proud Fifer and one of Scotland’s artistic treasures. Tales and songs were relayed by each in turn and while Owens and Platt were exemplary, it was Noakes, a walking repository of knowledge relating to folk song in Scotland and its influence in roots, country, blues and Americana, who pretty much stole the show. He kicked off the night with a killer version of ‘Cocaine Blues’ but not before explaining that it was based on an older song, ‘Little Sadie’. Noakes recalled his own adventures in 1960’s London where he first became aware of Cash and saw his renowned review show at the London Palladium. Singing Gram Parsons’ ‘New Soft Shoes’, Noakes explained that Cash, in the late sixties, was not considered especially hip by the then hipsters. As for his own songs, ‘Jackson Greyhound’ reminded us of what a fine songwriter Noakes is on a song about the sixties civil rights struggles. With a wealth of anecdotes including a killer one regarding Charlie McCoy, Noakes was just magnificent. 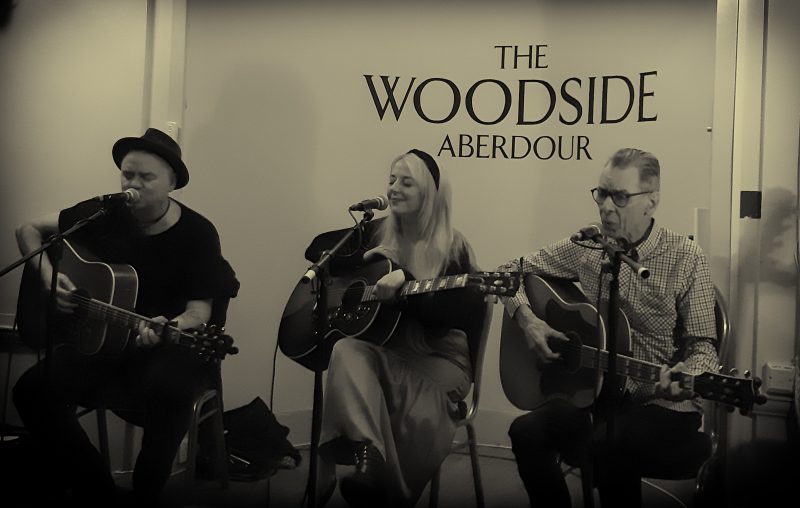 Hannah Rose Platt rose to the occasion from the start, diving in with a Cash Christmas song, ‘Ringing The Bells For Jim’. A bit left field perhaps but she wrung out all the emotion from this simplistic and endearing slice of Cash hokum, setting us up for her own angst-ridden songs. ‘Chanel & Cigarettes’ was a fine and spooky tale of ghostly revenge. ‘I Will Tell You Then’, dedicated to Laura Ingalls Wilder, author of the Little Prairie stories, was chilling in its evocation of hardscrabble frontiers while ‘1954’, a song which explores the vagaries of dementia, was soaked in sad emotion.

As the trio swapped songs and tales, Owens was the earthiest of the bunch. As on the Friday, he interspersed his own songs such as ‘Closer To Home’ with others more Cash related. There were repeats of ‘The Night Johnny Cash Played San Quentin’ along with ‘Southern Wind’, both exceptionally admirable in a solo setting, stripped of the band accoutrements but it was his delivery of ‘I Walk The Line’ which really had the audience going. Leading the trio of songwriters towards the end of the show, Owens revisited his Ronnie Lane inspired ‘Last Song’ with all three gustily joining in as Owens added more lost heroes to the chorus including Dr. John. 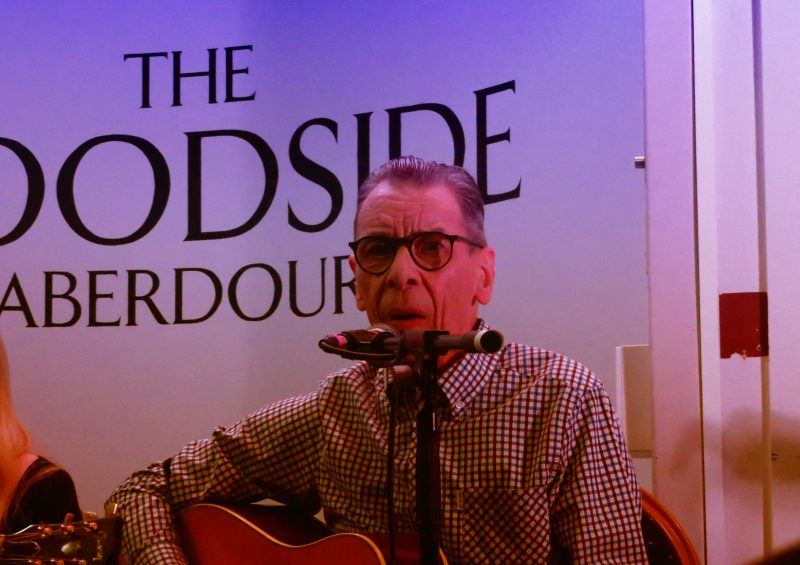 As is usual in a songwriters circle, the trio added guitar and harmonies to each other’s songs, picking it up as they went along, but they coalesced on the triumphant closing songs. ‘I still Miss Someone’ rang out magnificently before they closed with a reminder of Cash’s connection to Dylan on ‘Girl From The North Country’ with some excellent three part harmonies. Aside from the sheer joy of seeing such three talented performers so close up, this was like an education as all three delved into the songs and explained some of the birth pangs involved. A superb night.

The festival closed with a Sunday brunch time gig featuring Fay Fife’s new subversive alt-country band, The Countess Of Fife, The Marriage, a duo featuring Kirstin Adamson and Dave Burn, and David Latto. Sadly, your reviewer had to bail out early but Latto’s gentle and almost dreamlike songs such as ‘Santiago’ were a perfect balm for a Sunday afternoon while his rendition of Cash’s ‘She Used To Love Me A Lot’ was very tasteful. Our spies (AKA the net) tell us that The Marriage   transformed ‘Ring Of Fire’ into a glorious ballad while Ms. Fife’s new combo blew away any cobwebs left over from the weekend’s carousing.

All in all this was a fun filled weekend, the Cash tag handy for drawing folk in and striking a fine balance between Cash fandom and Cash influence. Owens, on Facebook, has asked fans whether he should do it again next year. The resounding response from this reviewer is yes.