There was a time when Toronto quarter The Sadies used to tour the UK as regular as clockwork, which made them one of those bands you could see in venues that weren’t several train rides away, and also one of those bands I could take my dad to see as they occasionally did Motörhead covers. The track ‘Northumberland West’ was the opener to their stupendous ‘Favourite Colours’ album from around a decade ago (a title which reminded people they weren’t American) and arguably the finest Hank Marvin-esque instrumental in their back catalogue. If you’ve never seen the Sadies live you are missing out on one of the eight wonders of the world. 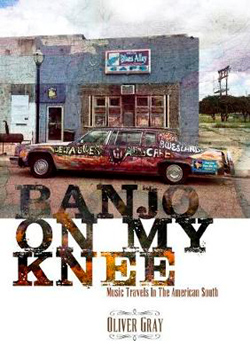 Aside from being a music promoter and author, Oliver Gray is Americana UK’s very own version of Radio 4’s From Our Own Correspondent with his annual missives from Austin’s South By Southwest Festival. Surprisingly, for a man whose CV as a promoter is a veritable smorgasbord of vital Americana acts, Gray had never visited Nashville but on the occasion of his 70th year decided that it was time to attend the annual Nashville based Americanafest and follow that up with a road trip through the south taking in some essential sights and places. Banjo On My Knee is his equivalent of a “what I did on my holidays” report and is delivered in a fine, low key style, detailing his adventures but equally revealing on the foibles and phobias of this quintessential Englishman abroad. END_OF_DOCUMENT_TOKEN_TO_BE_REPLACED

Kacey Musgraves this week expressed her anger over the US government’s stance on gun reform, following two mass shootings in the US this past weekend. “I don’t know what the answer is but obviously something has to be fucking done,” the singer told a crowd at Lollapalooza . “Maybe somebody will hear us if we all yell together and say, ‘Somebody fucking do something.’” Not everyone was happy however. Fox News pundit Ainsley Earhard told the channel: “She sings two great songs that I have downloaded … but now I’m gonna look differently at her because she is chanting that vulgar language.” Oh what a world.

In April 1649 about 20 men assembled at St. George’s Hill, Surrey, and began to cultivate the common land. These Diggers held that the English Civil Wars had been fought against the king and the great landowners; now that Charles I had been executed, land should be made available for the very poor to cultivate. (Food prices had reached record heights in the late 1640s.) The numbers of the Diggers more than doubled during 1649. Their activities alarmed the government and roused the hostility of local landowners, who were rival claimants to the common lands. The Diggers were harassed by legal actions and mob violence, and by the end of March 1650 their colony was dispersed. Many people have covered this particular track including Billy Bragg on his ‘Back to Basics’ album from 93, but the great folk-singer Leon Rosselson’s original still sounds fantastic today.

With thanks to Andy Clarke

We are 90 days away from crashing out of the European Union like a petulant kid slamming the door behind them as everything falls off the shelves on the way out. Still, good to know we’ve got a crack team of negotiators on the case. Oh wait.

Born and raised in Richmond, Virginia, Colin Healy and Caroline Mauck attended high school together, and after years of pursuing music in different directions, they were reconnected at a local spot in their hometown. Known for their lowkey covers but describing their sound as “folk rock”, they occasionally conjure up something original, like this delightful three-minute ditty from 2015 which isn’t a cover of the Eminem song of the same name.

It’s almost not even worth saying anything about our new celebrity leader, other than going off to live on a desert island in the middle of the Pacific has never seemed so appealing. (Ironically, Morrisey is probably happy.) Have I Got News For You… this is on you.

Our Pops-Master Mr Villers is taking a break at the moment so no witty commentary sorry but following Trump’s sideways move into out and out fascism this week at that rally, this particular track from Tracy Chapman’s excellent ‘New Beginning’ album from 1995 seemed appropriate: “Who stole your heart who took it away, Knowing that without it you can’t live? Who took away the part so essential to the whole, Left you a hollow body, Skin and bone? What robber, what thief, who stole your heart and the key?”

Elton John, surprisingly to me, declared great respect for Leon Russell as Russell’s career and life were coming to an end. Indeed I felt a bit affronted that the king of tinsel, both visually and musically, could be associated with a talent like Russell. However if you consider John’s early incarnation as an honorary west coast singer-songwriter on albums such as ‘Tumbleweed Connections’ (‘Ballad of a Well Known Gun’, for instance) then it made much more sense.  END_OF_DOCUMENT_TOKEN_TO_BE_REPLACED

Moving from the small town in Nebraska in which she was raised to the bustling New York City was the making of Kathy Zimmer. The music of her rural youth has combined with more sophisticated, urban sounds and orchestration to create something new and different: a genre that Zimmer herself describes as ‘cosmopolitan folk’. This conflict between the old and new and between styles gives Zimmer’s songs a clear identity and often provides the subject matter for her lyrics, as evident in ‘I <3 NY’ from recent EP, ‘Sparkling Smile’. American-UK caught up with Zimmer to explore the story of this beguiling song. END_OF_DOCUMENT_TOKEN_TO_BE_REPLACED