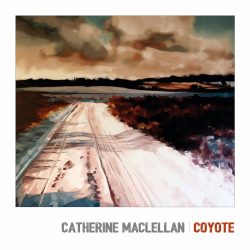 Not everyone will be aware that Prince Edward Island (PEI) sits on the Atlantic coast, a Marine province of Canada, the smallest in fact in terms of land and population – yet the most densely populated – and produces 25% of Canada’s potatoes. What this reviewer’s lazy skim of the interweb’s free encyclopaedia doesn’t reveal is that PEI is also the site of Catherine MacLellan’s home recording studio, where ‘Coyote’, her sixth album and first of original material since 2014’s ‘The Raven’s Sun’, was recorded. And a fine album it is too.

Catherine is famously the daughter of Gene MacLellan, of ‘Snowbird’ and ‘Put Your Hand in the Hand’ fame, and the songwriting and performing genes live on strongly. These are songs of big life-changing experiences, of breakups and new relationships, and, as the artist says, “letting yourself be seen – the good, bad, pretty and ugly”. There are happy songs and sad songs, slow ones and speedier, traditional folk and contemporary. There is even one about crossing the North Sea on a night ferry from the UK to the Netherlands!

Excellent instrumentation is a feature on the album; electric vibrato guitars, cello, fiddle, even bouzouki all used to excellent effect and vocally it is consistently strong throughout. ‘Roll With The Wind’, about friends who blow in to your life, create havoc and blow out again – “I’ve been haunting memories, holding wishes, healing crimes/Every time you roll on out of here” – has lots of said vibrato guitar. ‘The Road is Divided’ has strong electric guitars with MacLellan’s voice sounding a touch Joan Baez, and the poignant ‘Breath of a Wind’ has a perfectly sad cello to underline the lyric.

‘The Tempest’, which sounds like a Celtic folk standard complete with fiddle, stories of fishermen being lost at sea simply trying to make a living and even the archetypal missing letters in ‘olde’ English – “How shall I e’er return” – contrasts well with ‘All The Way In’, which could be imagined as something  Hootie and the Blowfish could beef up and blast out across a stage.

This is most definitely a folk album, heartfelt songs very well constructed and delivered, but with interesting contrasts. With the quality of this recording, PEI must be a very inspirational place.

One of Canada's finest still producing an excellent folk narrative