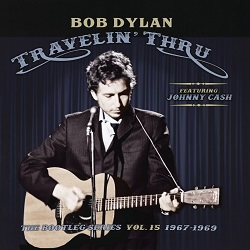 The first impression of ‘Bootleg Series 15: Travelin’ Thru‘ is how small it looks in comparison to recent releases in the Dylan archive series – we’ve been spoilt of course but this is no ‘Live ’66 Complete Recordings‘ or ‘More Blood, More Tracks‘. Three CDs and an illustrated background booklet make up the contents of the small box covering Dylan’s activities from 1967-1969. Disc One covers both ‘John Wesley Harding‘ and ‘Nashville Skyline‘ outtakes, Disc Two is material culled from a two hour session with Johnny Cash which continues onto Disc Three which also has Dylan’s appearance on the Johnny Cash show, two outtakes from ‘Self Portrait‘ and the material recorded for the ‘Earl Scruggs. His Family & Friends‘ film. And if that all sounds a trifle “bitty” then that’s because it is quite “bitty”.

According to the essay in the booklet the reasons for this can be laid at Dylan’s door: for both ‘John Wesley Harding‘ and ‘Nashville Skyline‘ it is stated that Dylan was well prepared for the recording sessions and already knew what he wanted to do. To the extent that alternate takes differ little from the final album selections – and so the ones chosen for this release are generally very close to the released versions with just a couple of songs showing that Dylan was still trying out different tempos, for example. The alternate takes offered on the first CD put the two albums right up against each other , with ‘Nashville Skyline‘ coming off as the poor relation – ‘John Wesley Harding‘ is unadorned and enigmatic, and had ‘All Along the Watchtower‘ to its credit. By contrast, judged solely on these outtakes, ‘Nashville Skyline‘ seems like a backward looking act of treading water – ‘Country Pie‘ is not a Dylan classic, although ‘I Threw it all Away‘ does merit that accolade. There’s a nice faster paced ‘Tell Me that it isn’t True‘, but the only completely new song from the two albums is ‘Western Road‘ a shuffling blues crossed with country honky-tonk.

The sprawling sessions with Johnny Cash captured on the second and part of the third CD consist predominantly of Dylan and Cash trading songs a little, and then trying various songs suggested by Cash – mostly with Dylan commenting that he doesn’t know all the words. it’s hard to hear anything as particularly revelatory – Cash and Dylan duetting on ‘Ring of Fire‘ is just a couple of guitar guys goofing about. There’s a glimmer of insight into ‘Girl from the North Country‘, which did make it onto ‘Nashville Skyline‘, as June Carter-Cash can be heard suggesting the pair try it. Overall though it’s not a spine-tingling listen, at best it shows what a disaster a duets album could have been – these are not voices that really complement each other well. Which leaves these songs as an interesting curio but few are likely to classify them as essential listening.

The remainder of the material on disc three has mostly been available for some time – on a ‘Best of the Johhny Cash Show‘ release and the Earl Scruggs film which is available on DVD. It’s handy, of course, to have all this in one place and there are a couple of recordings that were left out of the Scruggs film but it does also emphasize that there’s little in the Dylan Archive for these years that really demands a wider release. What there is generally can be associated with ‘Nashville Skyline‘, with Dylan in a non-challenging mood and, perhaps, even craving some mainstream acceptance.  ‘Nashville Skyline‘ remains Dylan’s sole country album, and ‘Travellin’ Thru‘ adds only a little – like the chance to hear Dylan yodelling on a Jimmie Rodgers medley – to what is already out there. By comparison the session with Earl Scruggs – although clearly scripted – has some really intriguing reshapings of well known songs and Dylan originals. Scruggs’ part on ‘Nashville Skyline Rag‘ is a joy – and gets Dylan laughing with pleasure.  It’s enough to make the listener wish that there was more to hear from this source, sadly though it’s a case of “that’s all she wrote“.

‘Bootleg Series 15: Travellin’ Thru‘ is, of course, essential to any true admirer of Dylan’s musical journey – that really goes without saying. For the more casual listener though this is without doubt one of the weaker contributions to the Bootleg Series – Dylan wasn’t touring so the only polished live material is from the TV spots. ‘Nashville Skyline‘ is mainly an album of conservative contentment, a calming balm compared to what Dylan did in the mid-Sixties and would go on to do on ‘Blood on the Tracks‘. But Dylan singing a non-ironic ‘Ring of Fire‘? Well, who really needs that?