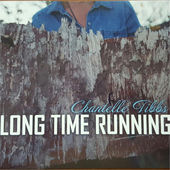 Chantelle Tibbs’ musical tastes cover her first musical experience, that of singing in an R&B group, pop music and a fondness for bluegrass and Americana. Born in Vineyard, New Jersey and later relocating with her family to California, Tibbs is in possession of an incredibly beautiful voice. Tibbs, as a teenager was a member of the group Flipsyde, but was asked to leave because she was too tall. Even as a child Tibbs was involved in artistic activities, an award-winning dancer (one-time member of Dance Attack), and the face on numerous children’s toys. From starting school Tibbs knows what it is to be in front on the camera, but it is only now with her full-debut album “Long Time Running” do we see her throw herself fully into becoming a solo recording act.

Assisting Tibbs (guitar, additional percussion) you have Nathan York Jr (bass), Eric Dudinsky (drums), Mike Witcher (dobro), Jamez (keyboards) and others; including Anneke Carter (keyboards) and Teri Lee Miller who plays effective harmonica on the classy dream-like Too Far Now. On the occasions her music is given a greater urgency and warmed in splendid Dobro playing (Oh My Love), the listener can’t help but be carried along with the music. Wait it Out sees her bring a certain amount of angst to her lyrics, and heart-tugging feel of her vocals (plus someone whistling), and with the track possessing a wistful, almost mystical charm it could be the strongest track on the album. Take Your Love like a few more it tends to be wrapped with a little too much care but there are traces of heartache to her vocals.

Little Girl with its moody ambiance peels back the veneer as her emotions are bared. And frailty that goes with it. I particularly enjoyed the keyboards as hints of R&B filter through. I Missed You closes the album, and though the music is tender and beautifully performed I felt there was something missing. On reflection I feel Tibbs’ music needs to find a niche and grow from there.