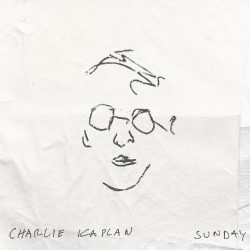 Charlie Kaplan is a New York based singer-songwriter and Sunday is his debut album written in the wake of his father’s death it represents an exorcism of sorts. “Each song [on Sunday] was an exercise in conjuring light, warmth, insight, guidance, release – my life’s absent emotional palette,” says Charlie. Initial listens highlight influences but deeper immersion reveals a playful, complex album full of nuance and heart.

The opening track ‘Small Business’ almost ambles into view, parading it’s three-chord Reed /Velvets flag for all to see. Half ‘Waiting For The Man’ and half lo-fi street shuffle it introduces our laconic artist; all soft shoe and whip-smart phrase. The next couple of tracks revolve around Californian themes, all fantasy and drenched reverb. ‘California Days’ and ‘In California’; all light and space they sound like the metropolitan musings of an East Coast fantasist as he practices his Velvet’s chord progressions. ‘The Light of Day’ is a joyous Stonesy thrash complete with full cheeks sax solo. ‘Snow Walk’ is a Kurt Vile lope through a slacker anthem, the central instrumental break is not only charming in its delicacy but has a rare melodic quality that becomes almost hypnotic as the repeated guitar lines sit on top of the rock-solid beat. There are reminders of Mudcrutch’s ‘Crystal River’ in this lengthy workout. ‘Pete Williams’ – the story of Kaplan’s High School tutor’s advice returns to the template of East Coast singer-songwriter of which Reed or perhaps De Ville are the most obvious; not only in the vocal stylings but also the phrasing and even the song construction – narrative, chorus, narrative, chorus, sax solo, fade.

The album closer is a drifting, dreamy ballad ‘Hey Young Man’ with hints of Grandaddy and Kaplan finishes with a flourish. The extended feedback during the song bringing us right back to the Velvets but also to Wilco and anywhere in-between.  Hymnal and meditative it seals the lid on a compelling debut that promises much for the future and the now.