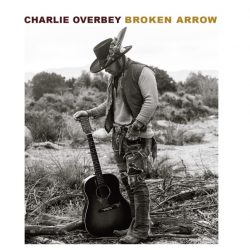 California native Charlie Overbey certainly comes with an interesting back story. Involved with the music industry for over twenty years, he has been in punk rock bands, toured the world with the likes of Lemmy and Social Distortion, spent time in prison, and also crafts luxury, vintage cowboy hats, which have recently featured in a Stella McCartney campaign. Seemingly not content with the variety which already consumes his life already, jack-of-all-trades Overbey turns his hand to country, with the release of new record, ‘Broken Arrow’.

The singer-songwriter is on record as saying he was brought up in “the school and church of Johnny Cash”, and it is the legend’s influence which permeates his latest work. There is a morose and dark lyrical mood throughout, but despite this, still manages to maintain an uplifting feel. ‘The Ballad Of Eddie Spaghetti’ is a rousing battle cry about mortality, inspired by its namesake’s battle with cancer, and Overbey sings: “If I die at 47/ if I die before my time/ will they drag me up to heaven/ or deliver me to Hell in my prime?”

At various points on the record, Overbey sounds like a rock frontman defiantly trying to sound country, with mixed results. The natural ruggedness on opener ‘Slip Away’ is paired wonderfully in a duet with the excellent Miranda Lee Richards; however, the vocal posturing on ‘Hero In Town’ and ‘Trouble Likes Me Best’ toes the line of overkill a little too uncomfortably. The latter, in particular, is a horrendous bro-country number featuring lyrical atrocities such as “Kentucky whiskey, and California weed… took me to jail in Tennessee”.

It takes until the second last track for a proper highlight to appear. It comes in the form of ‘Echo Park,’ which is genuinely brilliant. Overbey captures Springsteen-esque imagery and soundscapes, and is one of the few occasions where he sounds at his most natural.

On ‘Broken Arrow,’ Overbey provides a mixed bag with, unfortunately, more misses than hits. There is little doubting the Californian’s ability as a frontman, and his heart is evidently in the right place, with a clear love of his source material; however, the execution is sorely lacking.

Despite a few promising signs, Charlie Overbey largely misses the mark on his attempt to go country.