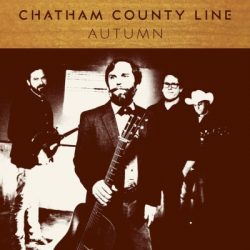 The seventh studio album from this Raleigh-based four-piece delivers exactly what you would expect, top quality Bluegrass from a band still firing on all cylinders. Formed in 1999 in the North Carolina city, Chatham County Line have been producing thoughtful albums in the traditional style since 2003. Autumn is no exception to this tradition and demonstrates that the string-band format is no barrier to imaginative song-writing. There is a devotion to the tradition of Bluegrass and incorporation of a range of roots influences evident on the album, but also present is the subtle presence of the history of the musicians in rock bands, hence the arrangements may fly a little higher than expected.

Main song-writer and guitarist Dave Wilson commenting on the band’s style said “we create a product that you’re familiar with and that you’ll enjoy going back to because you know what to expect”. He may be doing himself a bit of a disservice because there are moments on Autumn that you may not be expecting like one of the album highlights, ‘Jackie Boy’. Straying into an area that some may find taboo, the band have come up trumps with a gentle guitar pattern backed by mandolin and pedal steel to outline the tear-jerking story of the passing of a much-loved dog.

Thankfully lighter moments arrive, notably the lively instrumental ‘Bull City Strut’ and the country stomper ‘If I Had My Way’ that sees Chandler Holt take lead vocals. Equally lively is the album closer ‘Show Me The Door’, a song about a relationship’s ‘now or never’ moment. ‘Bon Ton Roulet’ is a meditation on dealing with a hangover, inspired by the sound of a woodpecker while the spiritual hints of ‘You Are My Light’ are a beautiful scene setter.

Autumn hit the No 1 slot on the Billboard Bluegrass Chart and it is easy to see why. A superb collection of songs and imaginative use of the format of the traditional string band.