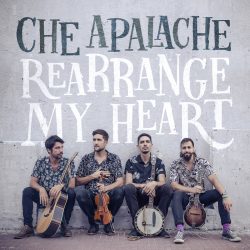 “Now, you and I can sing a song / and we can build a congregation / but only when we take a stand / will we change our broken nation.” Those lyrics are lifted from ‘The Dreamer,’ the first single from ‘Rearrange My Heart,’ the new album from Americana/Latingrass/folk group Che Apalache. ‘The Dreamer’ chronicles the life of Moises Serrano, a DACA Dreamer born in Mexico and raised in North Carolina, also the home state of Che Apalache frontman, Joe Troop. Troop worked on the song with Serrano (who is also the subject of a documentary, ‘Forbidden: Undocumented and Queer in Rural America’), and it’s the centrepiece of a powerful and diverse album that musically touches on everything from bluegrass, Americana, and folk, to Latin, jazz, swing, even rural Japanese melodies.

Joe Troop, a fascinating singer, writer, and arranger, grew up absorbing the bluegrass and acoustic folk music that dominates the foothills of the North Carolina Piedmont. Growing up queer in that environment, however, was not ideal, to say the least, so at a young age, he left to travel the world and immersed himself in the music and language of several cultures. It was during these adventures that he formed Che Apalache, with Argentinians Franco Martino on guitar and Martin Bobrik, mandolin, and Pau Barjau from Mexico on banjo.

‘Rearrange My Heart’ is produced by banjo virtuoso and all-around legend Bela Fleck. “We first met at my Blue Ridge Banjo Camp last year,” Fleck remembers. “They had come from Buenos Aires and asked to play for me. I was blown away and they blew away the crowd a few days later.” Fleck injects his rich history of acoustic music – including his groundbreaking work with the New Grass Revival – into the album’s overall sound, but at the same time, he stays mostly out of the way and lets each player shine.

Another standout, ‘The Wall,’ confronts head-on the treatment of undocumented immigrants and refugees at the hands of the current U.S. administration. Though the lyrics may be politically charged, they never come across as pious, but rather with true empathy and the desire to rise above intolerance. Though at times the shifts in mood and styles can be a bit jarring, still, their lyrics and playing are earnest and heartfelt, and that’s the best you can ask for in roots music, no matter where in the world those roots are grown.