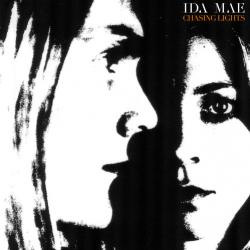 ‘Chasing Lights‘ is the debut album from this British-born duo, and what a debut it is; showcasing a depth and breadth of talent as well as a range of styles, from tender folk to swaggering rock and roll. Now based in Nashville, the pair have their feet planted firmly in the fertile soil of American roots music. Even their band name, Ida Mae, comes from an old Sonny Terry and Brownie McGhee song, and this heritage courses through the record with dazzling vitality.

The first few tracks put you in mind of the White Stripes, with a strong bluesy bedrock overlaid with fuzzy and exciting guitar sounds. This is far from all on offer, however, and the record soon takes a step back, and we are given some exquisitely raw and emotional songs.

These stripped back tracks are the strongest on the album, showcasing the best of Turpin and Ward, as well as legendary producer Ethan Johns (Laura Marling, Kings of Leon), who likes to leave things with as natural an edge as possible. Turpin has recounted how Johns likes to record live, and quickly, which is a sometimes difficult process, but the trust they put in him has been well rewarded. The record sounds intimate and immediate, whilst retaining an oft-sought and rarely-found freshness which gives it an infectious energy.

This is a debut of substance from a pair who are sure to stick around; a heartfelt and raucous ride out of the roots of American music straight into the 21st century.