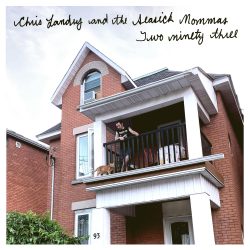 On their debut ‘One Fifty Five,’ Chris Landry and the Seasick Mommas found a proper balance between moody folk and Harvest-era country-rock. In fact, Stuart Rutherford’s pedal steel is at times reminiscent of the late Ben Keith. On their follow-up, ‘Two Ninety Three’ (both albums are named after addresses where Landry was living while the respective projects were written), the best moments occur when that balance is again met, although it happens less often this time around.

The Ottawa-based group – rounded out by Landry on guitar and vocals, Jim McDowell on keys, Steve Donnelly on bass, and Chris Buttera on drums with backing vocals by Kerri Carisse and KJ Thomas – are at their best on the foreboding ‘After the Flood,’ the Neil Young and Stray Gators-styled ‘No Intentions,’ and the dreamy ‘Carpark Graveyard’ (written by Matty Netzke). Elsewhere, the more traditional sounding ‘Why Couldn’t You Love Me Like I Loved You’ recalls early Willie Nelson, but it just leaves you longing to hear the real thing.

The deeper Landry goes into straight-up country, the less sure his footing. The most successful of these is the opener, ‘You Don’t Call Me Like You Used To.’ Even then, although its punchy pedal steel and honky-tonk backbeat get the job done, at issue is Landry’s vocal. Definitely an acquired taste, it begins to wear thin over the course of the album’s forty-minute runtime. Less than spectacular vocalists can be forgiven if their lyrics are captivating, but nothing here rises to that level.

Ottawa-based folkies sound best the further they stray from tradition