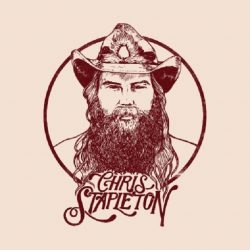 So here’s the big dilemma for the average, long time Americana fan, Chris Stapleton.  Americana has become hip, it’s the cool genre for the older music fan, those of us that started in alt-country have seen the ‘beards’ move in and dare to say it – it’s got trendy.  The relationship between what is and indeed isn’t Americana promotes much debate, Stapleton is the antithesis of this. Not country enough for Music Row, too popular for the hardcore alt-country fans.  The fact of the matter is, his music, his background, his trek to the top and his attitude is everything that alt-country (and its funkier non-deplume, Americana) is.

Regardless of having Adele record his songs, or polarising opinion is this record, the follow-up to the smash success ‘Traveller’, and part of a multi-volume set, any good? Simple answer – yes.  Is it as good as ‘Traveller’? – yes again.  It’s a truly remarkable record, joyous, revelatory and surely a seminal classic that in 20, 30 years, like ‘Traveller’ before it will be held up as the moment Americana dropped mainstream, sent country on a new path and those long toiling at alt-countries coal face finally get out of the niche.

I saw Stapleton at C2C in 2016, there was so much love in the room (the O2!) that it was hard not, like Stapleton, to be overwhelmed by it, genuine adoration – in 30 years of going to gigs, often 40-50 a year I had never seen anything like it. So much anticipation therefore was attached to this record, it could only disappoint surely?  Never.

Stapleton has so much soul, so much power, so much emotion in his voice and when backed by wife Morgane, he elongates the scale by which we measure greatness still further.  The whole thing is so effortless, so easy, so cool, relaxed, chilled, calming – he could sing to all thoughts of fraughtness dissipate.  As a lyricist he is sublime; “don’t put my love on the back burner” or “I was Picasso of painting the town red”, and then with tracks like ’Second One to Know’, and its 90’s Clapton feel, or ‘I Was Wrong’ with its Robert Cray guitar break the music is its perfect match.

Rejected by Music Row repeatedly, gospel soul voice, bluesy guitar, cutting his teeth in bluegrass band ‘Steeldrivers’ – what could be more Americana? This is Stapleton saying I can do this, every time. Go do better. I doubt anyone will this year.

Contender for the album of the year