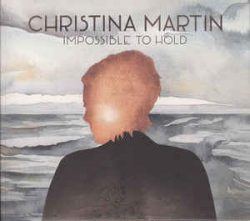 It’s always a quandary when reviewing whether comparing your subject to other acts is a good thing or a bad thing. Sometimes you just end up listing a load of the artist’s obvious influences rather than actually writing; sometimes it’s essential to name check other well-known acts in order to help the reader fully grasp what it is you can hear. It is a problem trying to turn sound into words without some kind of special, futuristic machine invented by Doc Brown in the year 2055 and brought back to the present in a Delorean. Oh, how we wish had one of those machines at Americana UK Towers.

‘Impossible to Hold’? Impossible to pin down, more like. Impossible to categorise without those aforementioned name checks. The publicity mentions Annie Lennox, Chrissie Hynde and Stevie Nicks among others and that’s dead right. However, there are some missing. On ‘Always Reminding’, the lead single, Martin manages to out-Kate Bush Kate Bush, if that were even possible. The publicity (in between the hyperbole) also mentions the fact that Martin’s music has undertaken a “significant evolution” and indeed, a listen to her 2008 album, ‘Two Hearts’ lets you hear what she sounds like in acoustic mode – in fact, more to the taste of an Americana reviewer than her latest effort, which has been shamelessly marketed as “pop rock”, never more so than the electronica-based single. What evolves more significantly is who Martin chooses to sound like on each track (We did say this was hard to pin down).

The opener, ‘Impossible to Hold’ reminds me of Martha Wainwright and an older Tammy Wynette (a la KLF), all rolled into one. Next, Kate Bush, after that ‘Deep Dark Red’, which baffles me slightly. There is a misfire with the lyrics here and I am reminded of my misspent teenage-long-hair days, spent listening to what one of my friends at the time called “Gay Rock”, in particular, Europe. The forced rhyme and just plain silly lyric, “Makes no sense to me, why you don’t live in another country” is worthy of Joey Tempest himself. She does it again on ‘Lungs Are Burning’: “Got to go out and get some, baby.” Shudder. Martin also does quite a passable impersonation of Melanie Garside (that’s Maple Bee to the uninitiated) on ‘Foreign’, hitting us with an almost Goth-sounding darkness; in point of fact, if you’re looking for happy music, you’ve come to the wrong album. Martin herself said, “There were dark moments in the process…” Hell, yeah. This is another song which lets the album down, as it is so repetitive that it is a relief when it’s over. It has potential, but never goes anywhere.

Martin channels the spirit of Stevie Nicks on tracks like ‘Keep Me Calm’ and actually, these are the best-crafted songs of the selection. The Chrissie Hynde influence is evident, with Martin’s chorus and reverb-soaked guitar leading strongly on tracks such as ‘Where the Dark Meets the Light’; and this is probably most like what a characteristic Christina Martin sound might be like. What is interesting on this album is the lack of introductions on a few of the tracks, Martin choosing instead to start with her vocal, gradually building the musical backing. Another thing which differs (or has evolved) from her previous albums is the over-reverbed vocal on every track: too polished, not immediate enough, too much like a modern view of what musical perfection is. At the end of the album, you want to just go and listen to Stick In The Wheel, or Gomez, or something “lo-fi”. There are some hooky tunes, but they do take a few listens to stick and this isn’t enough to make the album memorable.

A mixed outworking of different influences, but some misfires.